Our elf, Snowflake, is always up to no good. But, sometimes, even a master prankster like Snowflake runs out of ideas! Here are some funny elf on the shelf ideas for you to whisper in your elf’s ear if they are stumped and need help creating holiday magic for your little ones! 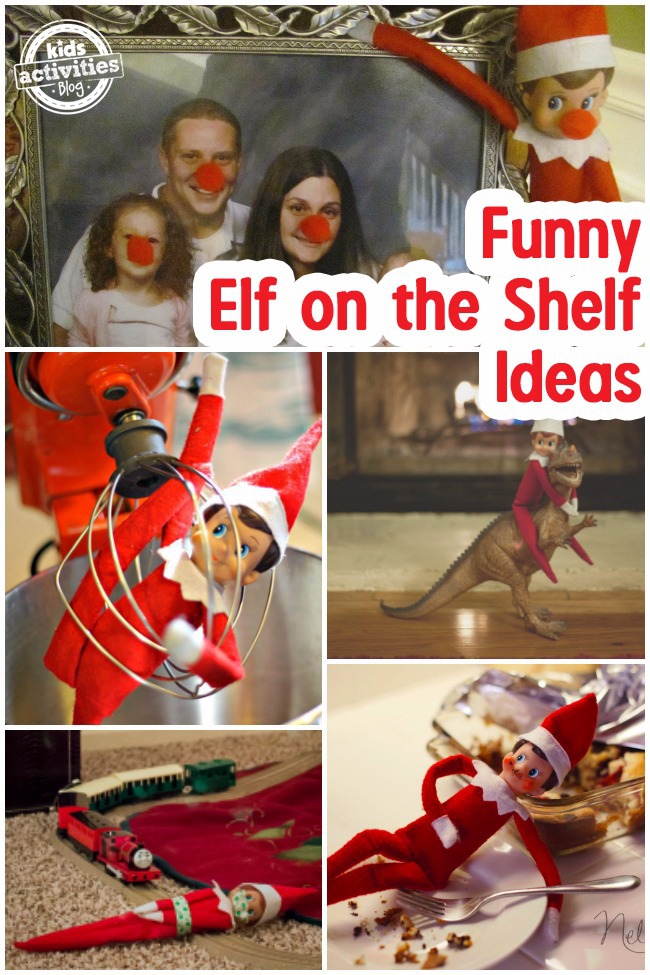 Chip and Joanna ain’t got nothin’ on nimble fingers from the North Pole! Also, how cute would that be for an elf couple’s names? Since Santa only lets his helpers have so much say in how things are done up North, elves have all sorts of extra energy to expel when it comes to making your home holiday feng shui with a twist!

Nothing ticks our elf, Snowflake, off more than not being included. Don’t make the same mistake with your elf! Thanks to this idea, from A Small Snippet, you can add them to your family picture wall!

Speaking of which, this elf added red noses to his family’s picture! via A Mommy’s Adventures

Nothing says Christmas like the kitchen! This room is the perfect place your for your family’s elf to get into some sticky situations with funny elf on the shelf pranks!

Frugal Coupon Living answered the question of what happens when an elf is trusted in the kitchen, alone, to bake cookies. They get all mixed up!

So… you your elf pigged out on dessert during the night with this fun idea from Nelly Cole Photography . Can you blame them?

This elf is incognito as one of the Rick Krispies elves thanks to inspiration via Love Bugs and Post Cards!

Trick your elf with some pretty yucky cookies with this funny idea from BarkBox. Also, you better hide the real cookies, because elves are quick learners!

Haha! Your kids will get a kick out of this message from their elf, thanks to Kitchen Fun With My 3 Sons

Funny Elf On The Shelf Pranks: Time Out!

Part of the reason why kids relate to and trust elves as much as they do, is that they are just like kids, themselves. Elves make mistakes, and get into trouble as they learn about the world around them, just like kids do. Here are some hilariously naughty elf on the shelf prank ideas that your kids will crack up over!

I’m not sure I want to know what this elf is up to, but NatalMe has some hilarious ideas!

When your elf is naughty, he just might end up having to write sentences with this idea from Piggies and Paws 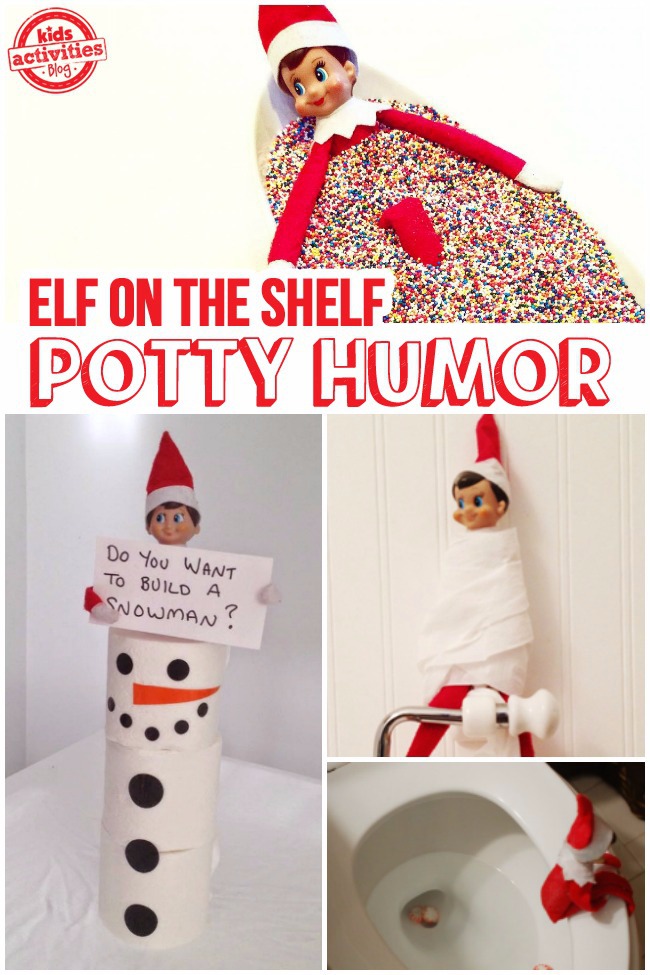 Potty humor is something that seems to transcend species, from humans to elves, alike! Here are some funny elf on the shelf pranks that are guaranteed to bring on the giggles!

A Small Snippet  answers a questions that you might not have realized you wanted an answer to… So THAT’S what happens when an elf goes potty!

PopSugar shows how toilet paper rolls are a great place for your elf to hide!

This elf got all wrapped up when he messed with the toilet paper, thanks to NatalMe

Do you wanna build a snowmaaaannnn… well, your elf does! A toilet paper snowman, that is!

Our elf, Snowflake, loves to make new friends. The only problem is that she is a tad bit competitive when it comes to vying for my daughter’s attention, against all of her toys. Needless to say, these funny elf pranks below are some of Snowflake’s favorites!

It’s a Mom’s World clues us in to typical elf talk!

Hey,Fancy Shanty, I wonder who tied up the elf and left him on the train tracks?!

This hilarious elf idea, from Little Bit Funky, is perfect for kids who love Spider-Man.

Make yarn snowballs for an indoor snowball fight with your elf with inspiration from Elf on the Shelf.

Perhaps your elf could catch a ride on a friend? Loving this roar-rific idea from Snippets from Suburbia!

The Force is strong with this funny elf, from  Lisa Stout Photography

Funny Elf On The Shelf Pranks: See You Next Year!

Kids dread saying goodbye to their elves at the end of the season. With some creativity, your elves can give a lasting farewell (and maybe even a giggle or two) that will stick with them until next year. Here are some ideas to help remind them that magic can be found in the details all year long!

Splat! Looks like this elf ran into the window on his way out with this sweet idea from The Nerd’s Wife

My daughter and I take pictures and document the yearly shenanigans of her elf, Snowflake, in an Elf Scrapbook. This way, she can fondly look back on their adventures all year long! One day, she can share her many completed elf scrapbooks with her own children!

Another idea is to have your elf occasionally pop back in for a visit throughout the year, during birthdays or holidays. This past summer, Snowflake stopped by to take a quick rest and eat some cookies during her layover en route to Hawaii for vacation. My daughter loved the elf-sized tropical shirt and grass skirt that she wore! She even sent a post card once she made it to her destination!

Bookmark fun elf printables to print for your kiddos to color and send to the North Pole whenever they miss their little buddy!

Home » Home & Life » Elf on the Shelf » Funny Elf On The Shelf Ideas To Try If You Run Out Of Ideas This Year!