Because all my favorite dinner recipes that were easy to make were slow cooker ones!  And now I can speed up the cooking process with my Instant Pot!

At its basic, the slow cooker is easier to guess because the answer is always…a really long time.  Instant Pot cooking times are super quick…in many cases so quick that I wouldn’t have guessed it correctly.

For instance, roast beef takes 15 minutes per pound in the Instant Pot and 8-10 hours on low in the slow cooker! 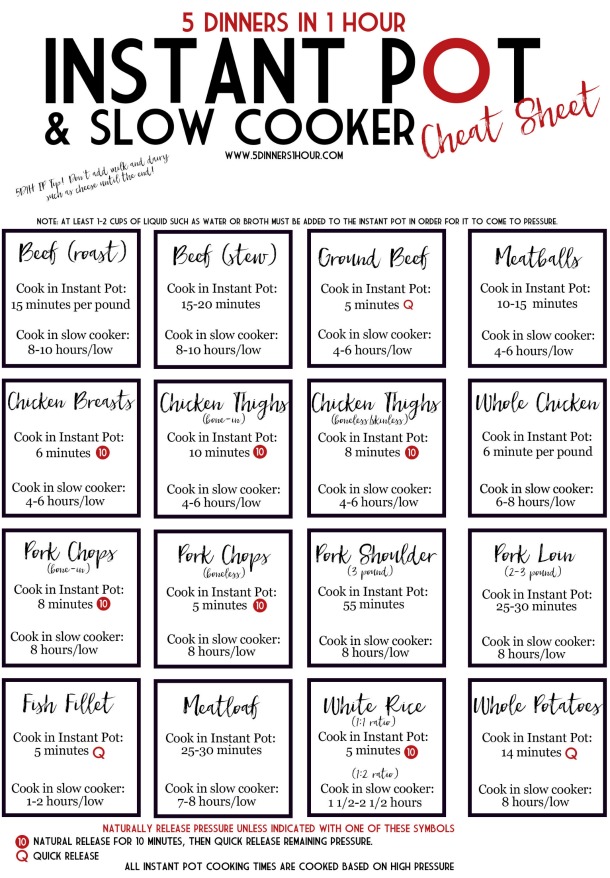 The time difference between crock pots and instant pots is a ton!  As you can see from the conversion chart, while fish cooking time in the slow cooker is pretty quick (for a slow cooker) at 1-2 hours on low, that same fish fillet is only 5 minutes in an instant pot.

White rice is similar with 1 1/2- 2 hours in the slow cooker and only 5 minutes in the instant pot.

If the soup recipe calls for 8 hours in a slow cooker on low, then it should be fully cooked in an instant pot in less than 30 minutes.  This goes for stews as well.  It is a huge time saver!

The instant pot works well for me because I have a hard time planning ahead!  It enables me to start dinner at 4 pm and still be fine.  The slow cooker can be a problem when you don’t even think about starting it until noon!

How to Slow Cook Chicken in an Instant Pot

There really is no way to slow cook chicken in an instant pot.  The slowest time is a whole chicken which translates to 6 minutes per pound.  That same chicken would take 6-8 hours on low in a slow cooker.

Getting Dinner on the Table

Both the slow cooker and instant pot have helped me get dinner on the table because it makes it much more convenient.  Especially because I am feeding three teenage boys!

A big thanks to 5 Dinners 1 Hour for the Slow Cooker to Instant Pot Cheat Sheet!  We have been partnered with them for a series of videos on our FB page, Quirky Momma.

If you haven’t seen how 5 Dinners 1 Hour helps busy moms get dinner on the table, you have to experience it!  <–amazing.

Their system of meal prep and super customizable meal plans is the perfect solution to the chaos of everyday life.

We all want to have a calm dinner with our family!

I know that one of the things I was worried about was planning ahead.  I know that will sound crazy to some of you, but I had fear of meal planning!

But the 5 Dinners 1 Hour plan took that fear away within the first day because it made my life so much easier.

You can sign up for 5 Dinners in 1 Hour by clicking HERE.

Use the printable slow cooker to instant pot conversion chart to adapt your favorite family meals to a quicker instant pot cooking time.

This will give you the ability to choose the recipe based on what you want to eat…not how early in the day it might be!

It can be!  Use the tools you have and let 5 Dinners in One Hour show you how to do the rest!

Let’s all agree to have a delicious dinner tonight.