I have a pretty large stash of paint sticks in my craft room, which is what prompted me to turn a couple of them into clown puppets. There are lots of things you can make from paint sticks and craft sticks, but I decided on clowns because they are colorful and joyful, and sometimes a little scary. I know there are some that fear the clown, which is why I try really hard to make them as cheerful as possible! 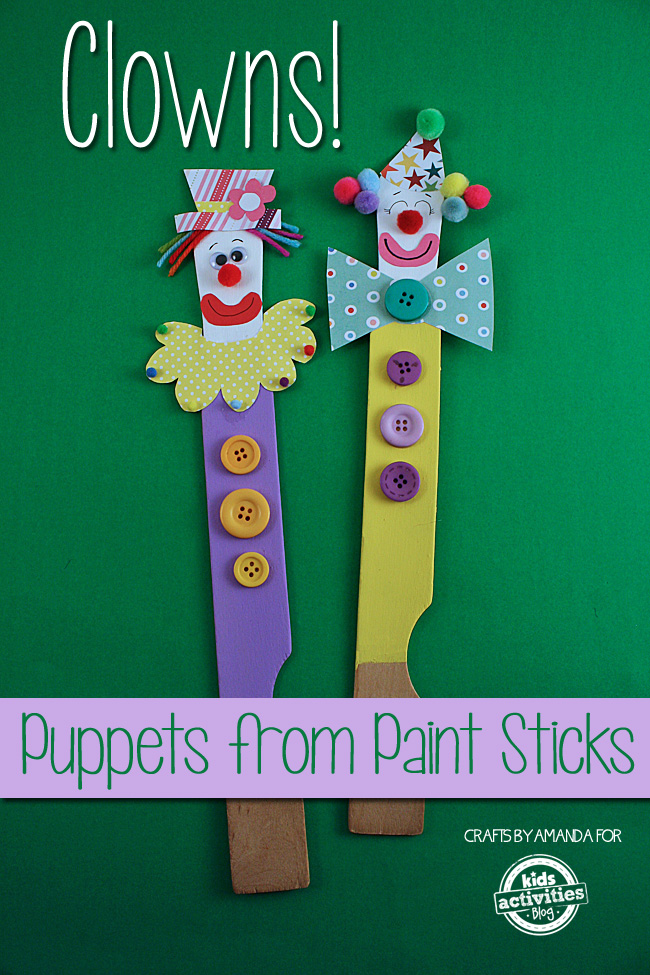 After all, the definition of a clown is a comic entertainer. When used to describe someone (stop clowning around!) it means to behave in a comical way, or to act playfully. What could carry more joy than play? 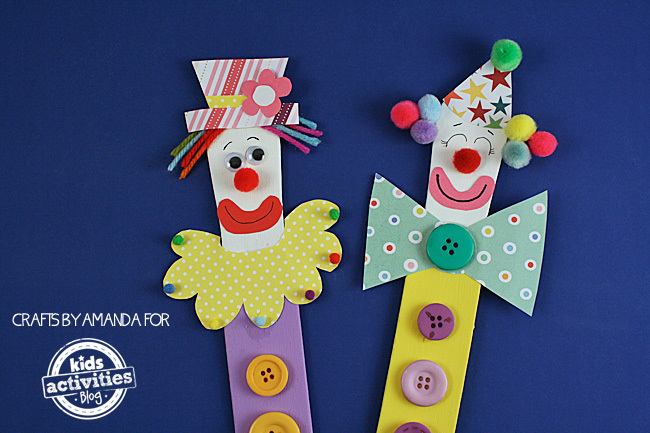 A clown's costume is usually very colorful and vibrant, often embellished with soft pom-poms and exaggerated accessories, like my clown's giant bow tie. 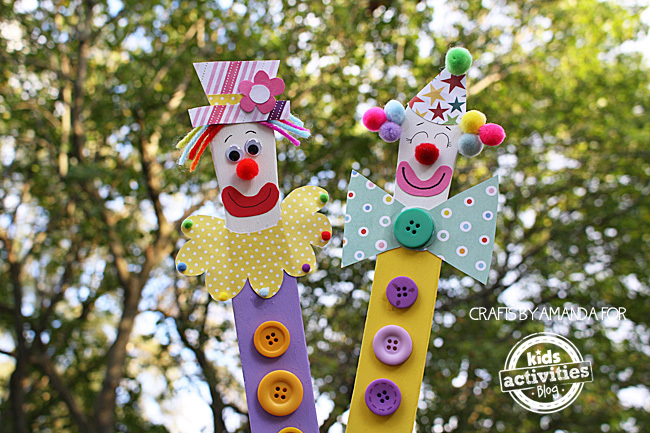 I ™ve provided a pattern for you below, but feel free to create your very own designs and embellishments! When you're all done, have a fun puppet show with the neighborhood kids. 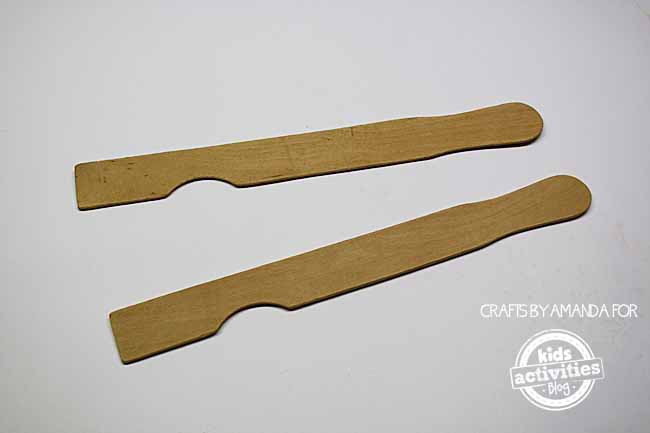 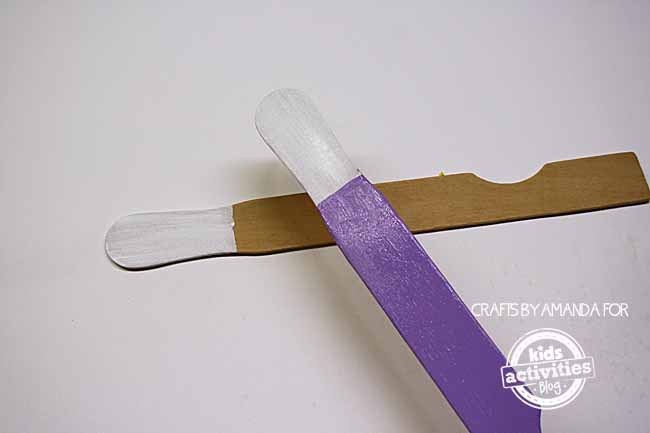 Paint one end of the paint stick white, enough for the head and neck. Mine were rounded on one end, so I used that end. Some paint sticks are square on both ends, so just pick one.

Next paint the rest of the paint stick purple (yellow for the other), leaving 2-3 inches at the end unpainted. This allows you to hold your puppet while decorating without getting paint on your fingers. 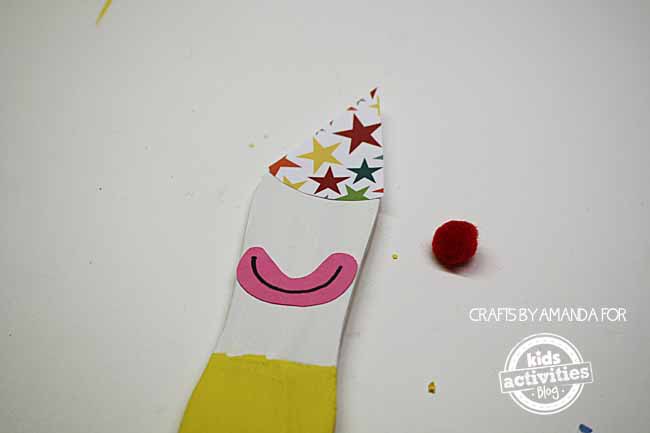 Use the pattern above to cut mouth from pink and red card stock. Use black marker to draw the smile on the mouth. 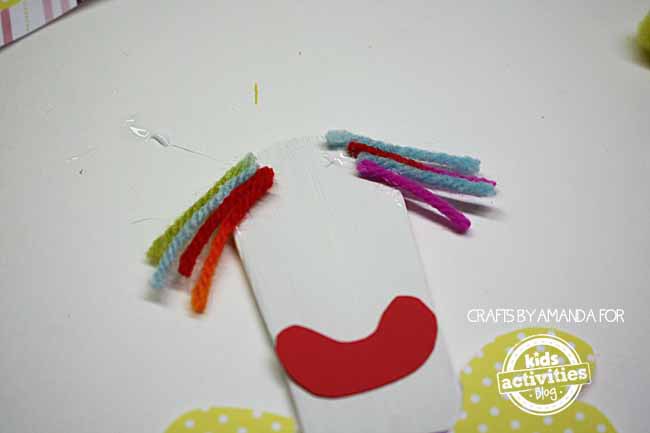 You can use yarn for the hair on one, and pom poms for the other. For yarn, cut it into 1.5  pieces and glue to the top sides of the white end of the stick.

For pom pom hair, glue three medium sized pom poms together in a triangle and let them dry. Cut a small strip of cardboard and glue it to the back of the head  so that it sticks out on the left and right of the head, attach the pom poms to the ends that are sticking out. This will keep them from falling off.

Use the pattern pieces to cut out the rest of the decorations for the clown's outfits and glue in place. Use red pom poms for noses. 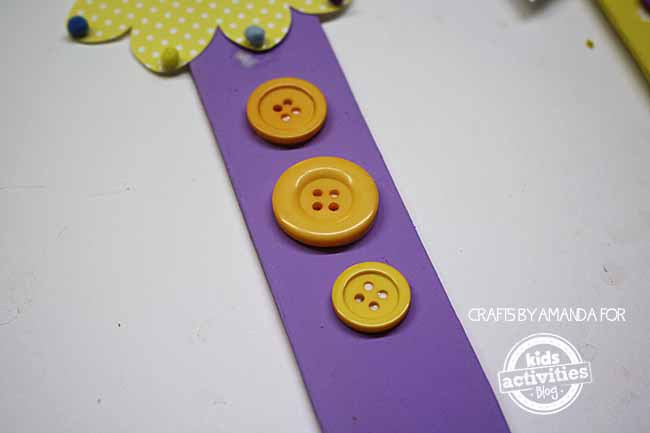 Attach buttons to the front of the paint stick body with white glue. Allow everything to dry before having your clown puppet show! If you like clowns like I do, I can show you how to make a Paper Plate Clown Puppet as well. Have fun!

Amanda Formaro is a well-known craft expert and author of the   books "Rubber Band Mania" and "Duct Tape Mania", the first two in a series of craft books for kids. She has been writing and crafting on the Internet for over fifteen years. Find out more on her blog,  Crafts by Amanda, where she shares tutorials with step-by-step photos for adults and kids alike.

Previous Post: « His team did everything they could to give this disabled player a shot, but it’s the OTHER team that blew me away.
Next Post: IHOP Copycat Nutella Crepes »