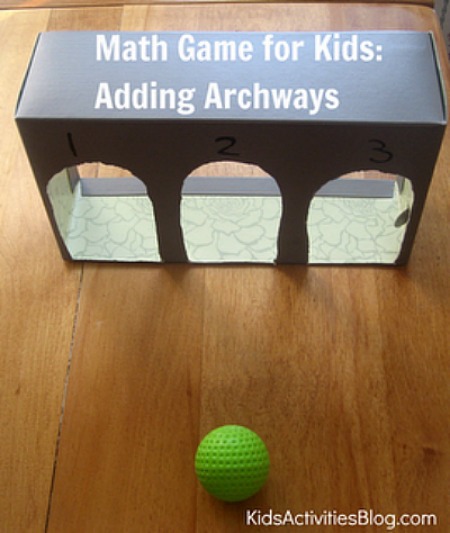 A few archways cut in to an old shoe box can be a fun way to practice adding.

The numbers one, two and three have been written on the top of these archways for my four year old to work on counting. Small sticky notes could be placed for each archway with various numbers to make the game for difficult.

How to Play Adding Archways:

The basic version of the game is to roll a golf ball or marble through archway. Each time your roll the ball or marble through the archway you earn that number of points. The points can be recorded on a piece of paper with number or tally marks. At the end of the game, you can add up the points or you can keep a running total and stop after someone has earned a specific amount of points.

Other ways to use the archways:

There are so many ways to use these simple archways. I bet you can think of dozens of them.

Games are a great way to make learning math fun!   Check out these other great math games for your kids:

Deirdre Smith writes/owns JDaniel4's Mom. After twenty years as a elementary school and technology resource teacher in Northern Virginia, she became a stay at home mom in upstate South Carolina. Her blog features ways she and her 5 year old are exploring learning, crafting, creating healthy meals and living life to its fullest. Deirdre can also be found on twitter as @jdaniel4smom and on her blog's FB page. You can also check her out on Google+.