Looking for a good Halloween movie? Look no further! We’ve gathered the best kid-friendly Halloween flicks we could find!

Our family celebrates Halloween all-month long and if yours does too, you might be looking for Halloween Movies for Kids that you can watch as a family.

Say no more, because we’ve gathered The Best Halloween Movies for Kids and have it all for you below!

The Best Halloween Movies for Kids

Stay festive all month long with these super awesome, and classic, Halloween movies. We have a great list of movies with some not-so-scary movies, and some movies that are a little spooky!

You should be able to find the perfect movie or two for the whole family from this great list of Halloween movies.

Each movie has a description written, but no real spoilers about how the movie turns out is posted. (This post contains affiliate links.)

Not So Scary Halloween Movies For Kids

Every movie in this not so scary section is a family-friendly film. They are great for little kids, so if you’re looking for family-friendly Halloween movies these are perfect!

Linus is the only one who believes in the Great Pumpkin who chooses only the most sincere pumpkin patch to rise out of and spread gifts to good children all over the world.

All the other kids think Linus is silly, but still Linus gives up trick or treating and even Violet’s Halloween party to see the great pumpkin. But there is one person who supports Linus, Sally!

It’s The Great Pumpkin Charlie Brown is a cute movie, a classing, something the entire family will love.

When Boo, a human little girl, wanders into their world the tables have turned and now the monsters are scared!

It’s up to Sulley and Mike to get Boo back home without the other monsters finding out about her. Can they do it?

At the start of Monsters vs. Aliens, Susan is transformed into a giant after she is struck by a meteorite on her wedding day, and soo finds herself apart of a team of silly monsters that the US government sends to fight an alien invasion!

Can this group of monsters stop the alien mastermind trying to take over the world?

A gentle Alien becomes stranded on Earth, and is befriended by a little boy named Elliot.

He keeps ET a secret, however, soo E.T. gets sick and the government steps in creating a dire situation for both Elliot and E.T. Can Elliot help E.T. get home before it is too late?

Moving into a crumbling mansion, an afterlife therapist and his young daughter are trying to rid the place of wicked spirits. But not all the spirits are wicked! One is a friendly ghost named Casper.

These movies are less suited for for younger kids, but still some of our favorite Halloween movies. If you like movies that are a little spookier then these movies will get you in a Halloween mood.

Hopefully you’ll be able to pick out a new favorite family-friendly Halloween movie to watch together.

When a man claiming to be Fester, Gomez’s long lost brother, arrives at The Addams Family macabre house, Gomez couldn’t be more thrilled!

But Morticia suspects that “Fester” may be a fraud and soon find she is right when con artist Tully Alford turns their life upside down.

However, Gomez realizes these two cons are after their fortune and must challenge “Fester” for his family? Can he face his “brother” and save his family’s fortune?

The Dark Crystall is about a Gelfling that goes on a quest to find the missing crystal shard of a magical crystal as it is the only way to restore order in world from the evil race of Skeksis.

A little boy who is very misunderstood soon finds himself taking on ghosts, zombies, and even grown-ups to save his town from a curse that is centuries old. But does he have what it takes?

Can he save his town? Paranorman is a fun movie with just enough silly and creepy to make it great.

The Nightmare Before Christmas

Jack Skellington, the Pumpkin King of Halloween Town, soon finds himself bored with Halloween. After discovering Christmas Town, he decides to put on Christmas instead.

However, it does not go as planned and now Santa Clause is in trouble!

Who can save Christmas? The Nightmare Before Christmas is a classic musical movie that touches all the right creepy notes.

Victor Van Dort is set to marry Victoria Everglot. The Everglot’s need money, and the Van Dort’s want to be higher in society.

Victor goes into the woods to practice his wedding vows and soon finds himself married to Emily, the Corpse Bride.

While Victoria waits on Victor on the other side, someone else comes sweeping in trying to steal Victoria away. One groom, two brides, whatever will Victor do?

After the gang breaks up, they soon find themselves brought together by a mysterious island resort owner who wants them to investigate strange going-on at the resort.

Can the Scooby-Doo and the gang put aside their differences to find out what’s going on?

Can they do it though?

These spooky stories on film are not great for little kids. They aren’t super scary, but they have some scenes that may not be suitable for little ones. These spooky movies are just what you need for this Halloween season.

When a realtor and his family are summoned to a mansion, the soon find out it is actually haunted!

While they’re trying to escape this scary mansion, the Realtor, Jim Evers, soon learns a lesson on how important family is!

But the real question is, can the Evers family escape The Haunted Mansion?

Zach Cooper moves to a new town and meets a lovely girl next door named Hannah.

However, Hannah’s dad is actually R. L. Stine (played by Jack Black), the author of the Goosebumps series and how odd he is. Why is he so odd?

Well, it seems that the monster he writes about are real and they are freed from the books! Can they stop the monsters and get them back into their books before it is too late?

DJ has suspicions that his neighbor, Nebbercracker, and the house he lives in. When the old man has to go to the hospital, DJ and his friends think the danger is over.

However, they’re wrong once they realize the house is a living, breathing, scary monster.

Can they protect the neighborhood from this Monster House?

Hocus Pocus is about a teen named Max who moves to Salem and learns of the town belief of the Sander sisters.

Witches from 300 years ago who were punished for practicing dark magic and harming children.

However, he soon finds, after lighting the black flame candle, this local legend is true when he accidently releases the witches. Can he and his friends stop them from hurting Salem’s children once more?

Bette Midler, Sarah Jessica Parker, and Kathy Najimy really outdo themselves which is why this my kid’s “favorite scary movie.”

An adventurous little girl named Coraline moves with her family in an old house.

Feeling bored and neglected she finds a hidden door that takes her to a parallel universe where everyone has buttons for eyes. She also meets a more caring and loving version of her parents.

Can she escape this alternate reality and save her real parents? 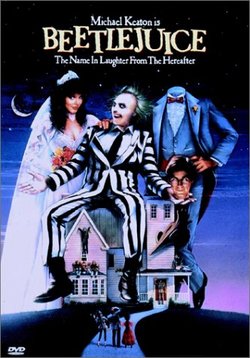 Adam and Barbara die in a car accident and find themselves haunting their former home.

They ask for the help of obnoxious Beetlejuice who instead of scaring, puts the new family and their new friend Lydia in danger. Can Adam and Barbara stop Beetlejuice before it is too late?

Can’t get enough Spooktacular Halloween Fun? Us either!