It is so easy to spend hundreds of dollars on a child’s birthday party. Food, entertainment and party  venue costs really add up. The point of a birthday party is to make your child feel special, and this year  I challenged myself to do exactly that without the hefty price tag. 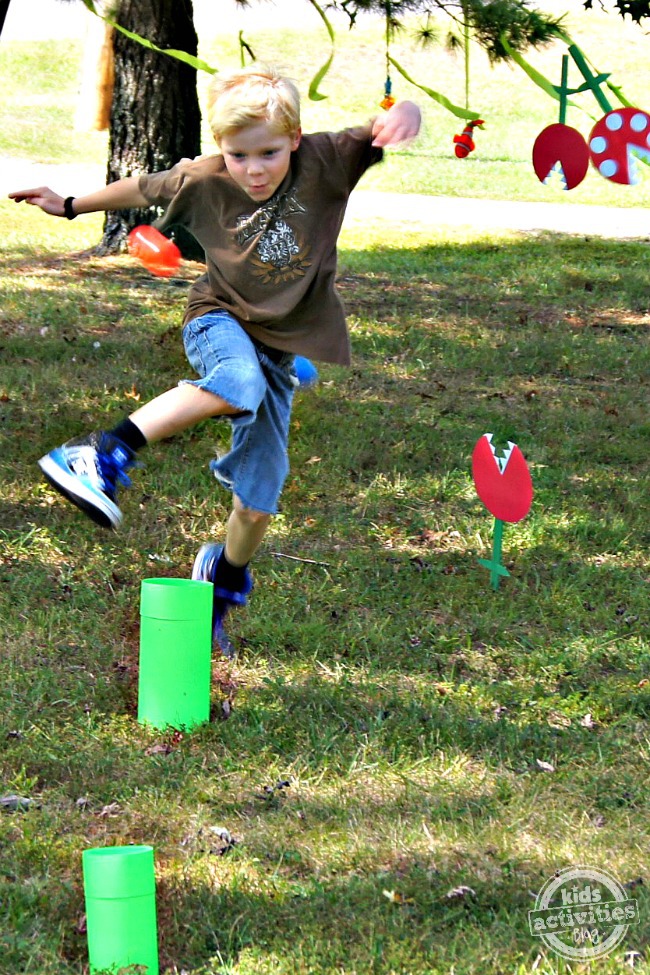 My son Timothy talks nonstop about the day that he and my husband fought Bowser and beat the Super  Mario Brothers video game. So I thought it would be neat to make a homemade obstacle course in the  yard with a Super Mario theme for his 6th  birthday party. I repurposed several items from my home,and used inexpensive craft supplies to make everything. I wanted to be able to reuse these items again  for play and room dÃ©cor so I kept that in mind as I made each item.

The boys all had a really fun time at the party, and had no idea that I did all of this on a really tight  budget. After the course was finished, they continued to play in the yard with the stuff that was set up  and they got a lot of exercise. Not everything went perfectly as I had planned, but they had a great time  anyway.

It was a great payoff!

We found music from the video game on YouTube and blasted it out of our home computer speakers,  opening the windows so we could hear it outside. The boys thought that was funny and it got them in  the mood to be in the game!

Here is what I did for the obstacle course: 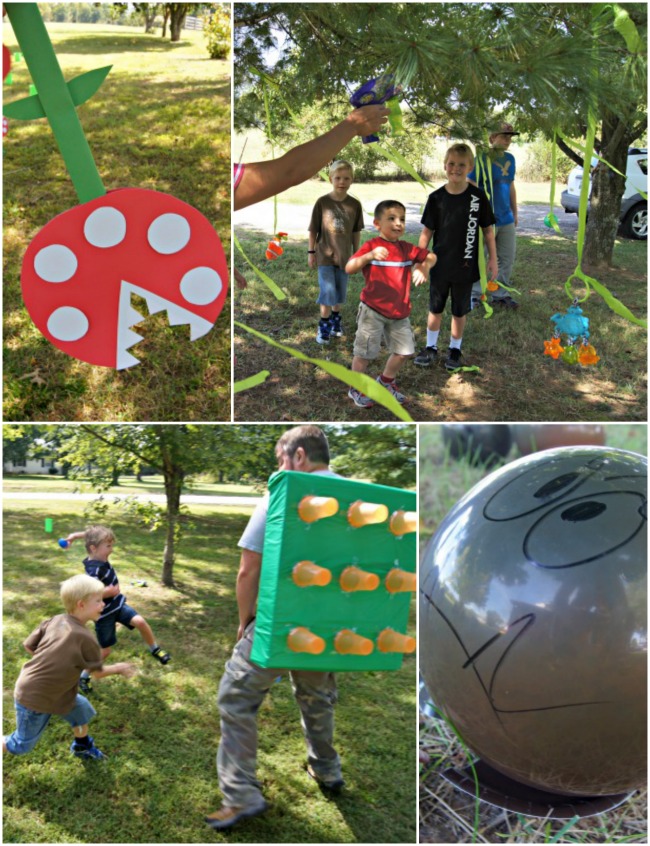 Water World– I hung streamers from the low hanging branches of a tree in our front yard and tied a  few ocean-themed toys I already had on hand to the ends. I used a hand-held bubble machine for effect  and told the boys to weave and swim  between the streamers to get to the next stage. The bubble  machine did not produce as many bubbles as I would have liked (operator error!) but they didn’t seem  to mind.

Dodge the Chomping Flowers– I hung two piranha plants aka chomping flowers  from a tree with  fishing line and stuck two in the ground. The stem  of the flower is a wooden paint stirrer wrapped  in construction paper so it was sturdy enough not to break. A light breeze picked up enough for the  flowers to swing in the tree, and the boys dodged them and jumped over the ground flowers to get to the pipes.

Jumping the Pipes– I used different-sized plastic containers from home wrapped in heavy green poster  board to make the pipes. They were small, medium and large-sized for different heights. We spread  them out a good length of the yard for them to jump over. As the boys dodged the chomping flowers  and jumped over the pipes, parents shot them with fireballs  to try and knock them off course. I used  lightweight plastic balls (the kind that come with play tents) for fireballs.

Stomping the Goombas– In hindsight, I probably should have put this towards the beginning because  the boys couldn’t wait to do this! Also, the wind picked up a bit and was rolling the balloons over, so  a few popped on their own. But needless to say, this was one of their favorites! I made 30 balloon  Goombas and they were gone in no time.

The Bowser Run– This was the grand finale, and well worth the price of admission! I made my  husband, Danny, a Bowser shell to wear, and the boys were given 4 fireballs as weapons to use against  Bowser to get past him and make it to the flag finish line. He was pummeled with fireballs several  times but he was a great sport and it was so fun to watch!

Mushroom cupcakes– I used a white cake box mix and white liners for the mushroom cupcakes. I  made baker’s frosting with red food coloring and used white chocolate chips as the white dots on the  mushroom tops. I took a black sharpie and drew 2 straight lines on the liner for their eyes. I also got a  little Mario cake topper to go on top of the big cupcake.

We a served take-out pizza lunch before the games. I was able to find a great deal for 50% off of  the cost of a large pizza by using an online coupon code. These are  specials you have to hunt for, they aren’t always advertised. A great place to check for deals like this is  RetailMeNot.com.

Super Mario Party on a Budget

The total cost of the party (including food) was $94. The cake topper itself was $20, and I could have  just as easily printed off a group pic of the characters and attached it to a popsicle stick for the same  effect. He likes the cake topper, but the pieces come apart into really small pieces and it is kind of a  pain to keep out of the hands of my crawling baby. It’s super cute, but I could have easily done without  it and it would’ve been fine.

This is still by far the least amount of money I have spent on a birthday party, and I am confident that  it’s one that he will remember forever. He even made one of his own chomping flowers out of my  leftover supplies because he wanted more. And I will never forget the look on his face when his daddy  chased him around the yard dressed like Bowser!

A lot of the dÃ©cor now decorates his room, and the Bowser shell is going to double as my husband’s  Halloween costume. I tried to make all of the house decorations and obstacle course items sturdy  enough to be played with again, yet inexpensive enough that it won’t be the end of the world if  something doesn’t make it after being handled. Plus, as we all know, he could be into something  completely different next year.

It took quite a bit of prep work to get things ready, so I recommend planning early. I have a small  baby, so I did not have time to work on this during the day, I did it all over several nights after the kids  went to bed. I really enjoy doing crafty creative stuff from home, so this was right up my alley.

The  most popular item the boys played with was by far the chomping flowers. And of course the fireballs!

This party was well worth the effort.

Audra Rogers is a jeans-and-ponytail mom that would rather do anything other than sit around and talk about her feelings!   She loves to save money and try new things to make stay-at-home life more fun and efficient.   She is determined to raise two polite and respectful, albeit ornery, young men and enjoys taking in the fresh country air on the porch first thing in the morning.  She can be found at Real Honest Mom, tweeting as @RealHonestMom and on Pinterest.