We spent the day at the Fort Worth Museum of Science and History.   What a fun way to learn about science with your friends! But you can’t learn on an empty stomach, right? We headed to Fort Worth a little early so we could have breakfast at Ol’ South Pancake House which my friend Holly over at the June Cleaver Nirvana blog recommended a while back. 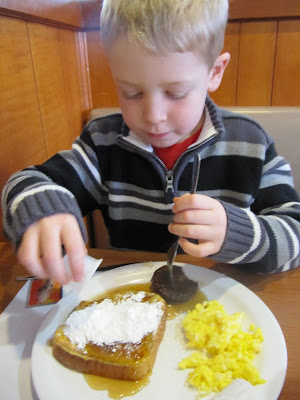 Rachel enjoyed bits and pieces of my breakfast while flirting with everyone around her.   She’s quite a little social butterfly.

Finally, we were off to the museum.   They have been closed for what seems like forever while doing a total $80 million redesign of the museum.   Let me tell you, the wait was worth it!

We found some great activities for kids at the museum. We found a station on generating electricity. The staff person let Nicholas hook up some wires to what looks like a fishing reel and let him spin away. Look at Nicholas’ face as he realizes that he is manually generating the electricty to turn on the little light bulb that the staff person is holding. 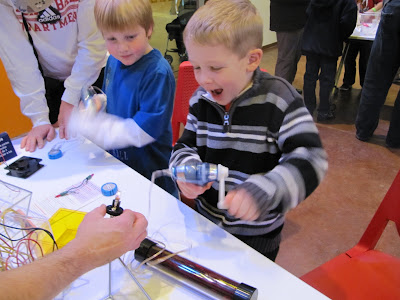 Next we went to a station on aerodynamics. There was a table with lots of crafty-type supplies such as scissors, tape, pipe cleaners, paper cups, coffee filters, etc. The children made their own creations and then floated them in an air tube to see how well their design floated up in the air. 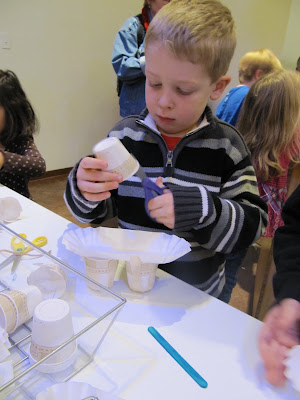 Nicholas loved this station and he made several different designs. Here’s one of them in action.

We also found a station with Snap Circuits (we must get some of these!). There are lots of different pieces that snap together in various formations to create electrical circuits. Nicholas played with some on his own but we also used some of the manuals at the table to create specific circuits like this one that powers a light bulb. 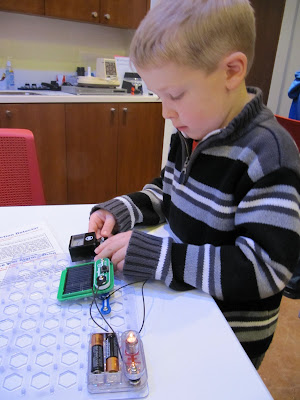 This was a challenging station with many activities involving art and light. Here Nicholas is drawing on an Etch-A-Sketch but he can’t look at his work directly but instead through the mirror in front of the drawing pad. Quite challenging! 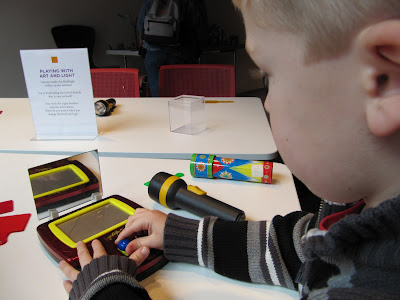 This was a fun activity. There is a giant box of extra fine sand and some turntables. The children pile up some sand on their turntable and then use various tools to create designs in the sand as it is spinning around. I wanted to play with this one but there were too many children in line for me to feel ok hogging it all to myself. 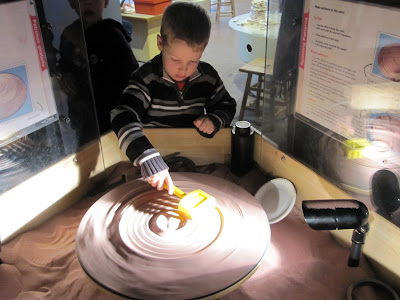 Another cool electricity activity. Nicholas kept getting drawn back to this one. He loves anything that glows in the dark and this one was exceptionally neat! 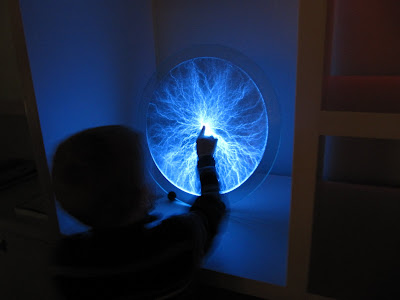 Not to leave out the little one, we headed over to the little children play area. Rachel had fun toddling all around. She spent most of her time toddling between the pretend grocery store and hospital. 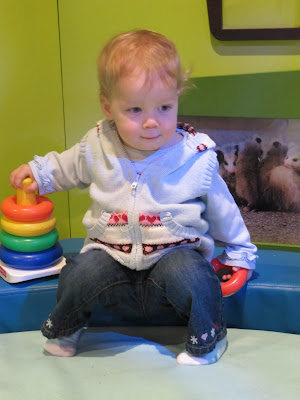 We had such a great time at the museum today. I see many trips here during the summer when we are looking for air conditioned places to play.