Home » Home & Life » her passion » When do you forgive and forget?
0shares

The Picture below is of me shortly after arriving at the hospital… in labor. That was 17 months ago. Time flies, and at this very moment the baby girl that was in my tummy in this picture, is now running back and forth across the living room babbling to herself on a play phone! I think she has a bad connection, because she keeps yelling “hi!… hi?…hi!!?!” into the receiver 🙂 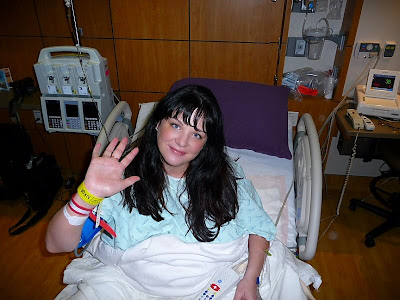 The day this picture was taken was the best day of my life, because it brought me my sweet smelling, pink bundle of love. But there is something else about that day that leaves me with a pit in my stomach.

My husband and I had hired a birth doula to help me through my labor. I lost my mom when I was 16, and when I married my husband I moved to Texas far away from all my relatives and friends. My desire for a doula was for all usual reasons, but also because I knew in that pivotal moment of my life – I would be missing an older female to guide me. It was important to me that I have a “mother figure” with me when I got scared, or when the pain became too much for me. But, the doula that we hired to be there, took our money…and never came.

You may wonder if we did our research? We did. We interviewed several different doulas, we took notes, we made sure they were in good standing with DONA the most notable doula association, an agency that oversees doulas and certifies them, we even picked a doula that had been voted the best in our area by readers of local magazine. And we asked questions…lot’s of them. In the end they all seemed great, but I felt most drawn to the older woman, I was looking for a stand in for my own mom after all. The doula was on her way to becoming a midwife, and was a trainer to new doulas in our area. She seemed like a great choice, she seemed motherly. We paid her, and she agreed to keep the two weeks surrounding our due date free.

When I went into labor we called her right away. She advised us to go get something to eat, and to rest up. Productive labor she said, was still   far away. My water broke a short while later in the cosmetic aisle in Walgreens … so we knew our baby was on it’s way! We called the doula again, she suggested we continue stay at home as long as we could. But she kept giving us reasons she shouldn’t come to our house, help me with the labor. We were both excited and scared, and went along with what she said. We stayed home despite the fact that I had Meconium in my amniotic fluid. She advised us to not call our doctor, since he would likely say to come to the hospital, but she advised us that wasn’t necessary. But as the evening got later my husband and I both felt uncomfortable following that advice, and went to the hospital anyway. She explained that she didn’t need to meet us there yet, because “we would have so much paper work” to fill out   first. And when we called her after I was given a room – she felt it would be better for her to “nap, and then wake up later and have lot’s of coffee.” She said she would call us in a little while, and let us know she was on the way. I was in full labor, and being given Pitocin to increase the strength of my contractions all night. She never called. And she never came. I was in labor through the night, and in the morning it was finally decided I needed a C-section ASAP. My husband called the doula, and told her she had missed my labor.

After getting home from the hospital days later, my husband called the doula to see what happened. She had no explanation for why she never showed up, but did offer him a refund of the money she had taken from us. Months went by…no money. We e-mailed her, and could see she opened our e-mail, but she would not reply. Michael tried, I tried, at first saying perhaps she had misplaced our address, and later asking her why she was not responding. Eventually she e-mailed me, and acted like she didn’t know why we were asking for a refund! It was infuriating. We had a new baby at home and no time for her games. But eventually we saw we had been lied to a second time. She had no intention of following through. So we contacted DONA. I submitted a formal complaint, waited for them to get in touch with her, get her side, and then interview us both on the phone. After months of waiting, I received paper work from DONA letting me know they had found her at fault. And recommending she refund our money, and write us a letter of apology, along with other requirements. She never did. And when I let DONA know she hadn’t followed through on any of those requirements, they told me they were just “suggestions” and they could not make her do them, and that they would not be revoking her “good standing” with DONA! So if another person researches her, just like we did – they will never know her history. It remains hidden, and she can continue to do this.

My husband is a wise man, and he has often suggested that we try to forgive and forget what happened. That she was wrong, but we only poison ourselves by continuing to feel hurt by it. I understand his point of view. But I often wonder if we should continue to pursue the matter for the sake of other expectant parents who may hire this woman, and never know her history. I also wonder if letting her win, will only serve to show her that being a rotten person pays. That it’s ok for her to promise to be there for someone in a pivotal life moment, and take their money…but not respect that agreement enough to follow through. Or at the very least, to apologize if something came up, and refund their money. Not to mention her advice to stay at home when she knew we had Meconium in the amniotic fluid. That could have caused our daughter to have long term health problems had it gotten in her lungs. Which thank God it did not.

Readers, this is the abbreviated story. There are plenty of other details that eat away at me. And I feel like I need to make a decision about this – should I contact small claims court? Write the Attorney general? Or do I just walk away? I’d like to have some closure on the whole thing, but I don’t know if I’ll get it by being the “bigger person” or by standing up for myself.

Below is a second picture, this one is of me after the C-section – holding an angel straight from God. She is the biggest blessing of my life, and nothing can ruin that. But I do wish that when I thought of her birth story I wasn’t left with this unresolved feeling…When do you forgive and forget? Thoughts wise readers? 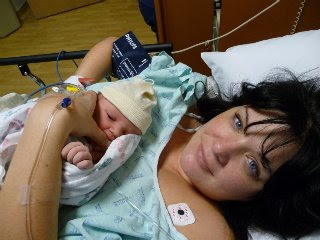