I don’t cook much.

OK, I really don’t cook at all.

BUT I can make a mean waffle.   Waffles at our house are a major food group.   They take special priority and can occasionally be found at the dinner table.

It isn’t all bad.   The boys enjoy applesauce or a fruit topping on the first one and then the syrup comes out for all to enjoy.   They really are good. 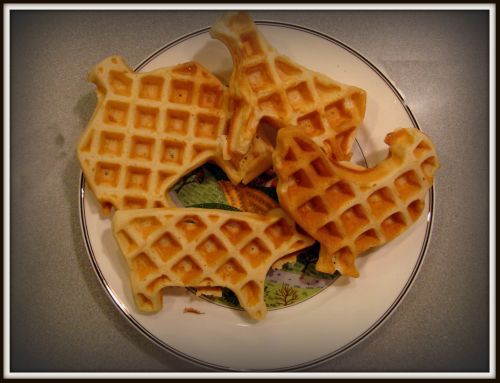 A few Christmases ago a family member gave us the fancy barnyard waffle maker.   I figure that protein is implied when the kids are eating cows and chickens.   The gift is well used.   It probably is used more than my oven.

The waffle recipe I use is originally from the Oster Belgian Waffle maker I received for my wedding 17 years ago.   I have tried a lot of other recipes, but this is by far my favorite:

That is it!   Pour the batter into the waffle maker…

When Holly isn’t trying to pass off breakfast food as dinner to her family, she is at June Cleaver Nirvana.