A few weeks ago, I found some mouse droppings in both garages & was less than thrilled to know that we had been visited by a rodent. However, I can deal with a mouse or two outside. We back up to a big field and are surrounded by fields and a golf course…plenty of places for little critters to live!

However, when I found droppings in Jeff’s office and in the laundry room behind the dryer, that was enough! Mice are not welcome in the house!

I set out to WalMart to find something to trap our guests. I didn’t like my options much.

*Poison: I didn’t like the idea of a mouse eating the poison and having to walk around the house before it died. What would it touch with it’s poison-laden feet & poop?

*Sticky trap: Completely inhumane. Even though I don’t want the mouse in the house, I also don’t want to give it a death where it must starve over a period of days.

*Traditional snap-trap: I couldn’t bear to find a squished mousey. And Reese is very curious…I was worried he would just need to touch it. Even though he’s a big 5 year old now, the bones in his fingers are still very tiny!

Then I stumbled upon the MiceCube. This is more along the lines of what I was looking for…a live mouse trap. Something to catch them & then I can take them to a field far away and let them go.

The MiceCube is about the size of a stick of butter, and is made of gray plastic. There is a little trap door at one end, and when the mouse enters, gravity closes the door and traps the mouse. To release the mouse, you simply turn the trap upside down, the door opens and the mouse can be set free.

Sure enough, it only took 2 nights to trap this: 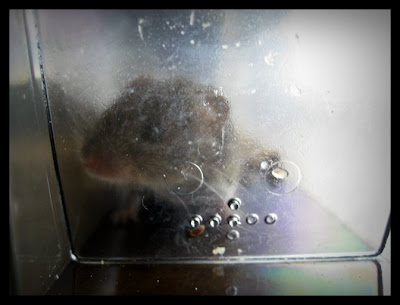 He was the tiniest little thing and had a big cracker snack before I took him far away from our house and let him go in a field!

To clean, I filled the trap with hot water & dish soap and let it soak.

I would highly recommend using the MiceCube if you’ve got a rodent in the house & you’d like to consider an alternative to killing it. The MiceCube worked exactly as it was supposed to!

It probably seems odd that I’m writing this review, but I was so excited at the success of our MiceCube that I just had to share!