In History we have been learning all about Ancient Greek culture so this week we had a Greek Food Festival!  Reese was beyond excited to wear a toga (thank you Hubby for knowing how to put a toga on Reese….Mommy failed miserably at that task and had Reese in tears!)

I made the laurel leaf headband from cardboard, tin foil, & a paper-sack headband… 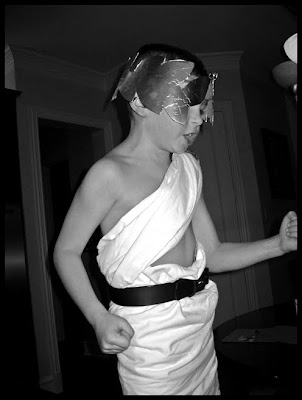 My laurel leaf headband was construction paper leaves & a paper sack headband, and my outfit was a sheet with a hole cut in the middle and a rope around my waist.   I read multiple accounts that women did not wear togas unless they were prostitutes (!!) so this is NOT a toga! It is a traditional drapey-fabric thing women wore. 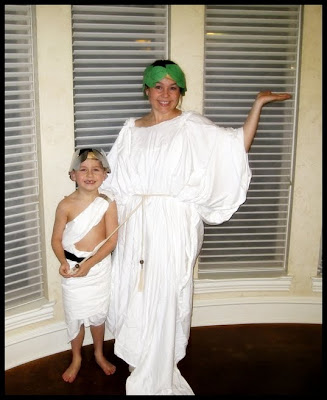 Our togas/drapey-fabric things lasted all of about 15 minutes and we decided they were uncomfortable for cooking & eating & playing…but they made for a fun picture!

Our Greek feast included roasted chicken (food of the peasants & land owners…for city folk, meat was too expensive with the exception of pork), cheese (goat cheese was what they ate, we ate colby jack because Mommy forgot to buy the Feta), grapes (grapes & raisins were popular fruit choices), and Goldfish (fish was a staple of their diet but Reese said a big “no!” to fish, so Goldfish were our substitute)!

During meals, they used bread to wipe their fingers instead of napkins, so we used tortillas as our napkins. The Greeks would then throw those pieces to the dogs after they wiped their fingers, but Reese liked bread too much and ate them! And no forks, so we dug in with our fingers.

The Greeks drank wine (although they watered it down because to drink it straight up would be barbaric!) so I bought some sparkling red grape juice for our feast. Reese also thought it was cool that he didn’t get to drink milk with dinner because the Greeks thought drinking milk was also barbaric, as they saved the milk to make cheese & a thick yogurt-type drink.

While we ate dinner, we watched a Wishbone episode called Homer Sweet Homer, & it told just a bit about the Odyssey (although we had read much more about Odysseus already).
For dessert we made Loukoumades, which are a sort of Greek donut (although I don’t think these were an ancient Greek treat…but whatever!). We made the dough (flour, yeast, salt) and let it rise. Then we took balls off the dough & fried them. After cooling a bit, we poured a syrup over them made from honey, sugar, & water (cooked down into a syrup) and sprinkled with cinnamon. Honestly, I wasn’t sure if I would like them because I don’t like honey, but Reese pegged the flavor just right when he said they tasted just like a cinnamon roll! The texture was more like a little dinner roll but the taste was really, really good.

It was fun to do something out of the ordinary to conclude our studies!

Heather spends time homeschooling, raising 3 great kids, & traveling with her family. She loves folding laundry but hates putting it away. She shares a love of Disney World with her Hubby, she's a cruise fanatic, & bird-watching hobbyist. You can follow her on Twitter as @CrazyZeus1.