Sifteo Cubes are unlike anything else we have ever played.  They are small video game cubes that interact with each other and their position in space.

You know how Kids Activities Blog LOVES to play…so we had to check them out! 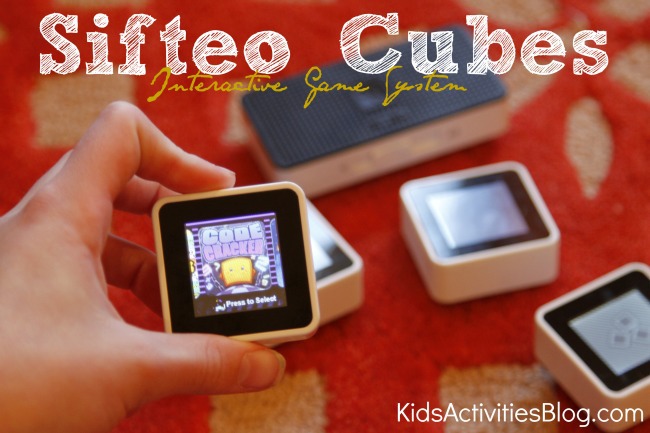 The Sifteo Cube Gaming System comes with three game cubes {each of these has a screen} and a base which houses the speaker and the on/off button.

Once I turned on the system, the cubes lit up and one of the cubes displayed a menu.  To navigate the menu I tipped the cube back and forth until I chose the game that I wanted.

I started with Chroma Splash.  It used all the cubes in a matching game.  It started out easy.  I would simply match the symbols on the edge of each cube and watch them pop and disappear.  A few levels later, I was begging my kids {and husband} to help me figure it out.

What I liked about trying each game was that at the beginning of each there was a tutorial with practice levels.  By the time things got challenging, I was comfortable with the tilting, shaking, pressing, sequencing, sliding, flipping and stacking needed for that game.

My kids picked it up much quicker than me.

It might be the 1000s of hours of video game practice they have been accruing! 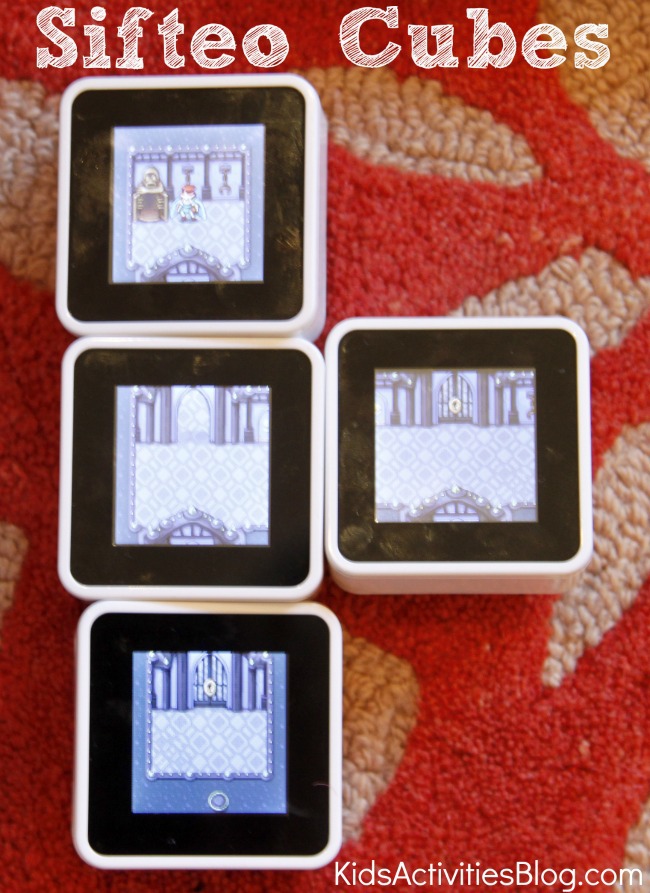 The games change with the position of the cubes.  It is a bit difficult to get a good picture, but see the room arrangement on the cube displays in the photo above?  If you were to change the arrangement into a long line or a square, the screen of the moved cube would change to show a different room.

It is fun to see the character walk off of one screen and onto another based on a path or hallway.  You can change the path by moving the cubes around.

Another game, Bliss Bomb, isn’t a game at all.  It is a crazy sound and light display dependent on the movement of the cubes.  If you leave them sitting quietly, there is very little sound or color. When you pick them up, rearrange them, shake them, tap them or slide them the sound and color gets as frantic as the movements.  It reminds me of a water fountain light display…only in miniature and without the mess.

The recommended age for Sifteo Cube starts at 7.  My nearly 7 year old boy picked it up quickly.  There are several games that can be played multi-player.

There is also the ability to expand the system.  The basic Sifteo Cubes is a set of 3 with the base.  Additional cubes can be added with a limit of 12.  The system that we tested had one additional cube.

I didn’t try Sifteo Sync, but it is a way to download additional games onto the Sifteo Cubes system from your computer via USB cable.  New games load automatically. 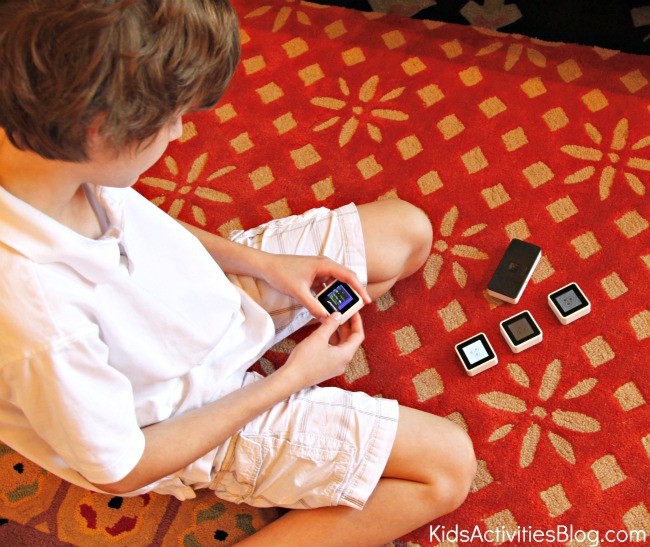 That Video Game with the Cubes

The bottom line is that we really enjoyed playing with Sifteo.  The set comes with a pouch that makes them extremely portable.  The boys played with them on the table, the floor and on the couch.  I was afraid that the cubes would be very sensitive to needing a flat surface, but they worked amazingly well wherever my kids played.  I am always concerned about the boys breaking things {that is what they do}, but was pleasantly surprised at how sturdy the cubes were.  They seem tough enough to hold up to active play.

My boys thought they were cool.  My oldest reported the the best part was how there were a bunch of them and they could be moved around.  His favorite game was Teenage Mutant Ninja Turtles.

Thanks to the sweet folks at Sifteo, we have a set to give away.

This would make the perfect Christmas gift for anyone over the age of 6 {including tech-lovin’ adults!}.

Thanks so much to the sweet Sifteo people who sent us a set to try out.  They are also providing the giveaway prize.  You can find out more information by visiting their website, following them on Twitter as @Sifteo, checking out their FB page.
Share1
Tweet
Pin6
7 Shares