If you know me in real life, you know that I have an opinion about everything.

Oh, and my opinion is laced with priceless advice.

If only the world would stop and listen. 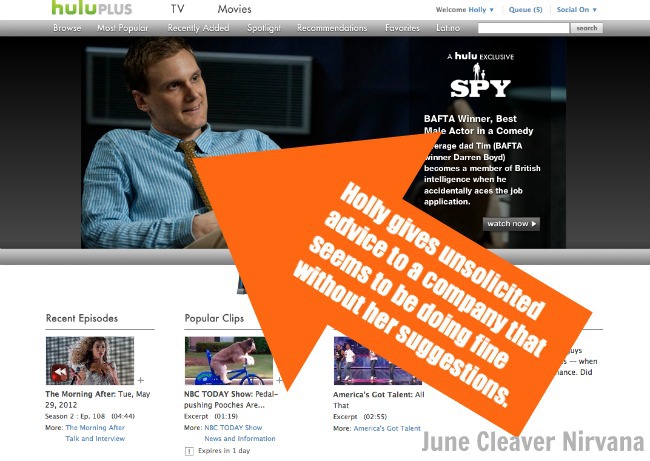 Hey Hulu, I would pay more.

Let me step back and start at the beginning to fortify my argument for further fleecing.

Over the last few months I have discovered the joys of watching a TV series from start to present.   I started with all the series on Netflix that interested me:   30 Rock, Life, Downton Abbey.   Once I ran out of Netflix, I moved on to some from iTunes that I couldn’t find elsewhere:   Modern Family, Southland, White Collar, Covert Affairs.   Based on some really good suggestions from my FB page, I decided to watch Scandal and Revenge.   Both full seasons were available on Hulu, so I signed on for the Hulu plus membership which is comparable in price to a Netflix membership which is much cheaper than buying the seasons on iTunes.

What I was unprepared for on Hulu was the commercials.   I mean, I just paid a bunch of monthly money…what is up with the commercial breaks?

Well, as I watched through both series’ seasons I got “used” to the commercial breaks.

At the top of the screen during a Hulu commercial break, you have the option of giving feedback on the relevance of the commercial or in some cases, it allows you to swap for a different advertisement.

When I am in the middle of a plotline, a quarter would be a small price to pay to avoid watching the Jack in the Box guy do the robot.   Again.   And again.

Seriously, how much money could they possibly making by subjecting me to the hybrid car commercial where parents are picked up from the airport?   Again? And Again?

And if my $.25 plan doesn’t balance the bottom line, I have a bonus additional suggestion.

Hey Hulu, I would pay even MORE money than that.

Hulu is sitting on a goldmine during the political season.   There are several political ads that I would pay several DOLLARS to avoid {Those would be the anti-Cruz ads.   I have no idea about what the actual politics are surrounding Cruz and his opponents, but I do know that I vote for NO MORE anti-Cruz commercials and would be willing to pay to make that happen}.

If this all works as well as I expect, Hulu could eventually stop selling advertising altogether because we would be paying to skip the threat of ads.