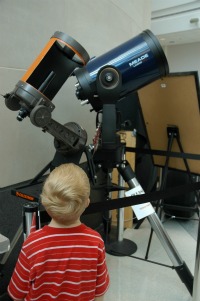 Think that young children can’t appreciate something so distant and abstract as other planets in our solar system?

Have you thought they were too young to enjoy a show at the planetarium?

The University of Texas at Arlington has made sure that this is not the case.   The Planetarium at UTA offers some incredible shows geared specifically for children.

This weekend’s show is called Secret of the Cardboard Rocket.   We’ve seen this show in the past and my kids loved it.   We watched two children on a magical journey through the Solar System, aided by a talking astronomy book, a cardboard rocket, and a vivid imagination. During the show, the audience lands on Venus, flies through the rings of Saturn, and discovers the secrets of the Solar System.

On our most recent visit to the Planetarium, we got there a few minutes after the show had started.

Let me tell you, you don’t want to be late for a planetarium show!

We walked into the pitch dark theater and of course our eyes were not adjusted and we had no idea about the layout of the seating. A lady was in the midst of giving a brief introduction to stars and the planetarium screen was on so the audience could see the stars that were being discussed but it was such a dark blue picture of the night sky that it provided NO light at all to help us find a seat. Seriously, it all seemed pitch black to us.

We first ran into a wall and then we just had to hold on to the handrail to figure out where to go. But then the handrail just stopped! By then a little helper person came up with a flashlight shining down on the floor but she didn’t tell me where to go. I still had no clue about the layout of the room and where the seats were! It was a bit of a humbling experience. But the little helper finally found us some seats at the front of the room and we thankfully sat our dazed and confused bottoms down. 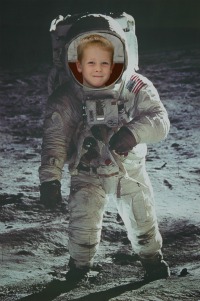 Please, if you go to the planetarium, you really, really want to get there BEFORE the show starts.

We’ve seen another show at the Planetarium called, “The Stars At Night Are Big and Bright”.   It covered a little of everything from stars and constellations to planets and galaxies. The show starts in Arlington and you see yourself leaving the planetarium and traveling up into outer space to the edge of the galaxy. It was a great show but I think Secret of the Cardboard Rocket is really the best one for a child’s first planetarium experience.

The Planetarium at UTA is definitely fun for all ages so bring the kids to the show this weekend.   They will have an “out of this world” good time!