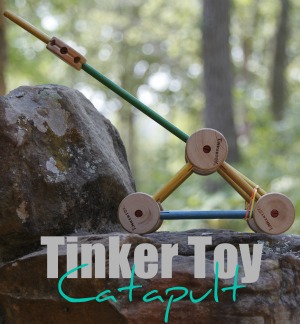 Last week we made a Lego Catapult and my boys started making catapults out of everything in sight.

They made this one make out of Tinker Toys.

A Tinker Toy catapult is pretty simple construction and soon marbles were zinging across the house.

Ryan(10) had mentioned that he had changed the angle of the arm and thought that it might work better in a different position.

I latched on to that question and decided we should do a scientific experiment to determine what angle worked the best to launch a marble down our driveway.

The round tinker toy piece that rotated around the rod that held the arm to the base had four holes in it.   One of the holes was occupied by the lower part of the arm that was attached to the rubber bands.   That left three different possible positions for the upper arm – each created a different angle.

Position 1:   The hole closest to the lower arm = 90 degree angle

Position 2:   The hole opposite the lower arm = flat arm 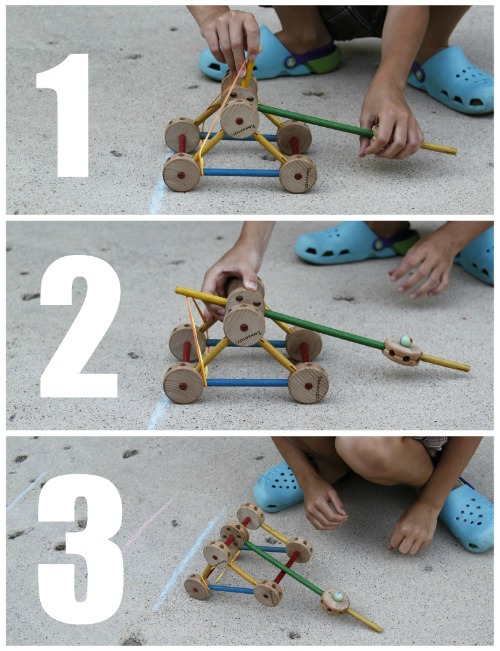 Ryan had thought that position 1 might launch the marble farther than position 2 and so we tried it out.

Before each launch, I asked the boys to guess what would happen.

They were excited to see if what they predicted came true. 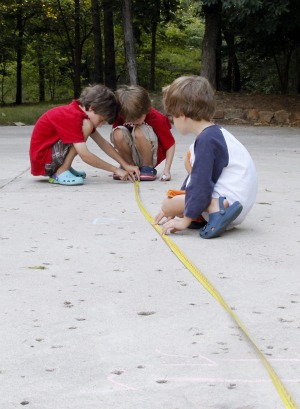 Ryan launched a marble from each position 3 times while his brothers took turns marking the distance and fetching the wayward marble.

After the 9 trials, the boys measured the longest distance from each with a tape measure.

There was much discussion whether they should record the distance in inches, centimeters or feet and inches.

They decided to do feet and inches and then collaborated on each measurement to make sure they had it correct.

The measurements were then recorded in a chalk table I started for them on the driveway.   Reid(8) was in charge of writing down the measurements for each longest launch. 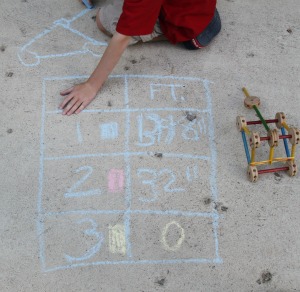 It was good practice for him to think about how feet and inches would be noted.   He got a few extra lines here and there, but had the right idea!

Turns out position 2 easily won the contest with a longest flight of 32 feet.

Position 1 came in second with a trial of 13 feet 8 inches.

Position 3 was a total bust and actually launched the marble backwards twice.

This experiment was something very simple to construct, but think about the skills involved for the boys to participate: