When it comes to my mad skillz in the kitchen, they are pretty much non-existent. My kids’ favorite meal is Hamburger Helper and my husband usually just looks at what I’m cooking, then fixes something separate for himself. And, to answer your question, YES I find that insulting but I am so used to it by now, I have become desensitized. At least he is doing the fixing for himself.

But, when it comes to canning, I’m not afraid to shine. In the summer of ’07, I won 5 first-place ribbons and one second-place ribbons for canned (preserved) foods at the Clinton County Fair. (I could only find 3 of the ribbons for the picture. I think I was using the other 3 for bookmarks.) 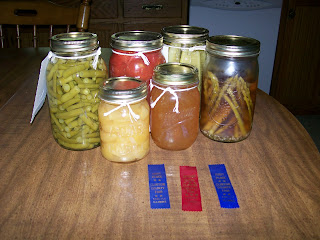 That fair, by the way, is exactly the stuff you see (or read about) in Charlotte’s Web. There is a parade, Fair Queen pageant, Kettle corn, all types of livestock judging, carnival rides, (local) celebrity cow milking contest, etc. 4-H has a booth selling Lemon Shake-Ups (If you’ve never had a lemon shake-up, you’ve never tasted summer.) And, of course, in the exhibition hall there are lots of submissions for judging, like quilts, canned foods, fresh foods, artwork, hand-sewn clothes, woodworking, etc. I submitted pickled asparagus, green beans, tomatoes, dill pickles, apples, and pear honey. 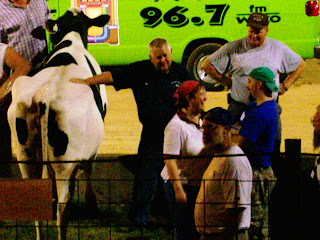 That’s Texan Papa in the green ball cap. He was a “local celebrity” because he’s a pastor. It doesn’t take much to be a celebrity, I guess. 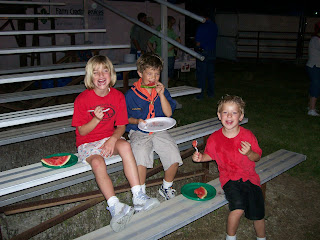 There’s Peppermint Patty, Charlie Brown, and Linus eating watermelon slices off of a frisbee after the very long and hot parade. (I walked with PP and Linus in the parade, 6 months pregnant, pulling a wagon and throwing out candy. Linus walked with the Cub Scouts.) See what I mean about it being a real country fair?

Now, in case you don’t know what pear honey is, I am happy to tell you: It is a wonderful sweet spread, much like the consistency of marmalade, but with a taste of honey. However, the honey does not taste sugary-sweet, but rather fruity-sweet. I found a recipe for Pear Honey when I was given 2 bushels of very ripe pears and had no idea what to do with them. Well, as it turns out, pear honey is best made with overripe pears. It’s SO simple to make. If you have pear trees or if you get pears from a neighbor, I highly recommend making it. It is so unique and your friends and family will gobble it up! I even made some and put it in small half-cup or half-pint jars and then gave it out with a mini loaf of pound cake at Christmas time. It was a perfect teacher gift and also for the church secretary and organist.

Put pears and pineapple juice in a large stock pot. Add sugar. Bring to a full boil and reduce heat to medium for a gentle boil. Cook, stirring constantly, for 30 minutes. Pour into prepared jars*. Process in boiling water for 10 minutes. Makes 6-7 pints.

When Texan Mama isn’t taking the County Fair by storm, she is raising her four…almost 5 (yes, I said 5) children and writing at her blog, Who Put Me in Charge of These People??