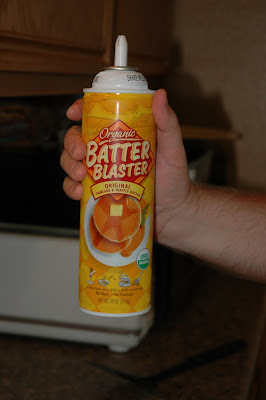 Ok, I admit it. I’m a sucker for new products. If I see a new flavor of Doritos, I must try it. A new flavor of Blue Bell – it’s in the cart. So when I happened to see this odd product in the refriderated section of my local grocery store, I just couldn’t resist buying it. It’s called Batter Blaster and it’s pancake batter in a whipped topping style squirt can! Crazy, huh?! And it’s even organic – not that I have really been concerned about whether our pancake batter is organic or not. But in case I was ever worried about it then this product would relieve my fears.

However,  my husband  (aka the king of pancakes) had his own fears when I asked him to use the Batter Blaster instead of his usual pancake batter this morning for our ritual of weekend morning pancakes. But, being the good sport that he is, he gave it a shot! 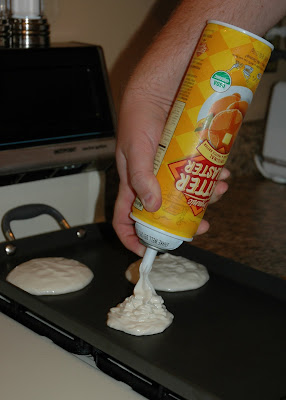 It was quite interesting. The batter shoots out of the can just like whipped topping but quickly oozes into regular pancake circles. They were a little thicker than our usual pancakes and the texture was a bit chewy. But the biggest problem we had with them is that they cooked phenomenally fast. By the time the edges of the pancakes were just barely starting to look cooked and those little bubbles appeared, well, by then it was too late and the pancake was burned on one side. We liked the idea of the Batter Blaster but never could figure out that microscopic window of time that we had to flip the pancakes where they weren’t undercooked and drippy or overcooked and burnt.