Home » Home & Life » her passion » There’s Always A Story…
0shares
There’s always a story behind pictures…
and as I was going through pictures last night on the computer
I remembered so many little details about Reese when he was a baby.
Things it seems one will never forget,
but as time has marched on, sure enough,
those quirky things only come to memory when
a picture brings them back.

I love this picture because it shows a few things Reese loves.

For a while, he was obsessed with sports jerseys. He would change through ten in a day…

He’d run back to his dresser & pull out a new one all the time.

bring them home to see his face light up at another choice!

Then one day, it just stopped. It’s sad…I don’t remember the last time he asked for a jersey…

Of course, his paci…his Love from day one on Earth! 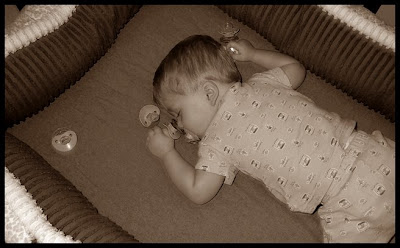 Daddy, with his great wisdom, argued a better point.

“What is it hurting? He speaks fine, his teeth are fine. He’ll get rid of it when he’s ready”

“See! We must take them away!”

The doctors & dentist all said it was OK. That perhaps he *was* too old…

but the pacis weren’t hurting anything.

So there we had it.

I gave up the paci argument.

And sure enough, Reese decided that one day he was too old for a paci

and that the Babies needed his pacis.

So we rounded them all up,

he put them in a box

and kissed them away.

He went back for one last goodbye kiss…

opened the box lid & pulled out one last paci…

brought it to his lips, whispered “goodbye”,

gave it a smooch

and put it in the box forever.

The Paci Fairy came and brought something exciting & new,

but that box of pacis still sits on the top shelf in the laundry room.

Will I keep them until he’s grown?

How can I possibly throw out something that offered such comfort & was so important?

The pacis were his Lovie.

I look at the box every now & then…but I can’t bear to do anything with it.