*Stop the presses for the medal ceremony*

Before you completely mock me and my inability to put food on the table on a regular basis to sustain my family, let me just say that this was a bit out of the box for me and it worked out.

It all started a few months ago when I became addicted to The Next Food Network Star.

Blog-Stedman and I picked our favorite   and rooted for her the entire series…Aarti   Sequeira.

I was in the grocery store by 1 and had dinner on the table at 5.

I made the menu from her first episode – Massaged Kale Salad, Sloppy Bombay Joes and Creamy Pistachio Pops.

Here is how it went for me…

Sloppy Bombay Joes – Obvious from the title, Sloppy Bombay Joes are sloppy joes with an Indian twist.   Aarti makes these with turkey, but because Blog-Stedman will ONLY eat beef (don’t even get me started) so I made this recipe with beef.

It was pretty straight forward until I got to the pistachio and raisin addition.   I couldn’t add pistachios because my boys had eaten all the ones we bought at the grocery store while I was cooking other things.   I couldn’t add raisins because Blog-Stedman also has recipe raisin-aversion.   So I skipped that step altogether.   The final product turned out great even with the missing ingredients.

At dinner, EVERY SINGLE ONE of my kids ate this.   Ryan(9) had seconds.   Reid(7) reported it smelled funny, but finished his portion.   Rhett(4) ate his sans-bun because that is how he is rolling these days.   Both blog-Stedman and I liked it a lot.

Massaged Kale Salad – This recipe was a lot of fun.   I have NEVER used kale for anything.   I wasn’t even sure where it would be in the produce section.   Aarti suggested using Black Kale, but my market didn’t carry that so I used Red Kale which quite honestly looks purple.   Ryan had watched the show with me earlier in the day so when we got to the part of massaging the kale…literally, he was participating with both hands.

The stripping of the kale went just like Aarti had shown on the show and the dressing was really easy to make.   I love the thought that this salad is so sturdy it can stay in the fridge fully dressed for days.

The only hitch I came across was the mango that I purchased at the store wasn’t ripe enough and didn’t taste good.   Luckily I had some frozen mango in the freezer which I used instead and will probably do in the future because it is easier.   I think that fresh orange slices or mandarin oranges would work well too.

At dinner, EVERY SINGLE ONE of my kids tried this and ate at least a 1/2 of their portion.   This is something that is out of the norm for them so I was impressed that they were willing to play along.   The sweetness of the mangos really helps it be kid-friendly and the pumpkin seeds were a hit as well.   I really liked it and will enjoy the left-overs for the next few days.   Blog-Stedman who isn’t a big fruit-in-salad kinda guy actually thought this was good.

Creamy Pistachio Pops – These are like Indian ice cream pops.   It is based on a recipe for kulfi.   It has really unusual ingredients like Earl Grey tea and cardamom.   Cooking it results in a heavenly smell.   It was wonderful…I could have bathed in it.

After cooking the mixture, you strain it to remove the tea   and spice pieces.

At this point I finished the recipe and placed it in the fridge to make pops after dinner with the boys using my Zoku which freezes popsicles in less than 10 minutes. 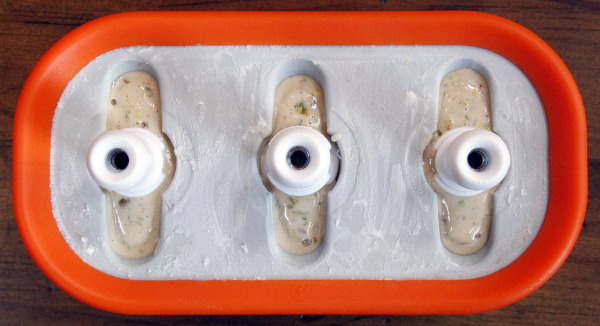 The only problem is that the consistency of this recipe is more like ice cream than popsicles and it never froze hard enough to extract the pops from the Zoku.

We scooped out the frozen pistachio ice cream into bowls…

…and all was right with the world.

Oh, and I have enough mixture left over that I did put them into a traditional ice pop mold so I will have MORE tomorrow.

See, I told you all was right with the world.

Overall it was a great success.

I don’t know if The Food Network expected 40 year old Texas suburban housewives to be part of Aarti Party’s demographic, but I am in.

Can’t wait to see what I will be making next Sunday.