I refer to it as the “pop heard round the world.” At least, that’s how it’s felt to me all these years.

And nearly 5 years later, that pop I gave to my daughter’s tush, still wet from the bathtub, echoes in my ears… An ugly reminder of just one of the many times I’ve learned that disciplining kids isn’t fun. 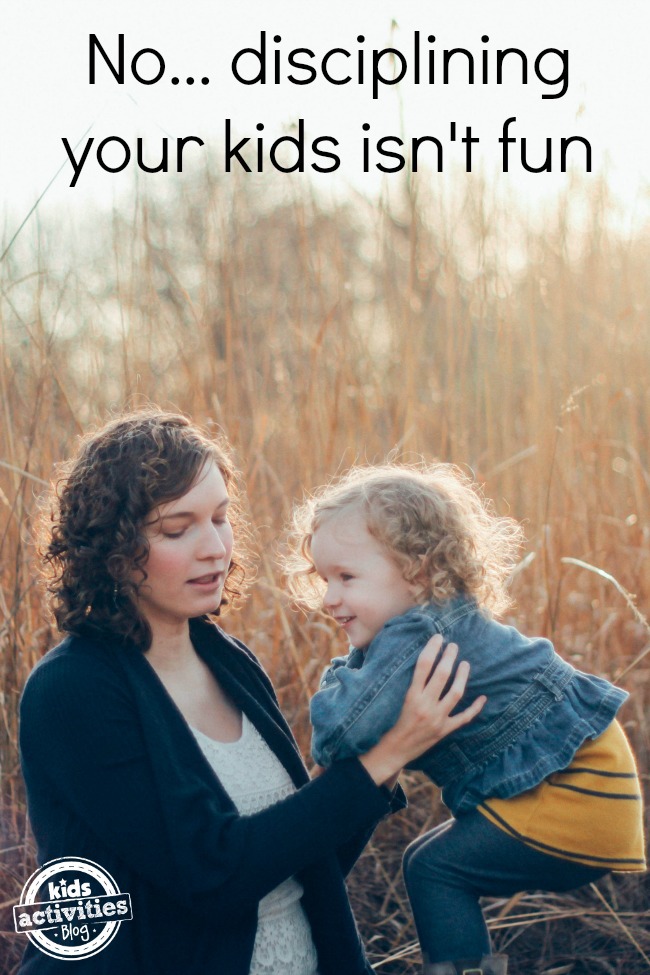 I can still see my handprint on her little body.  I can still feel my heart beating so fast.  The anger and frustration I felt…at first toward her and then immediately toward myself.

I remember before I had kids, you know…when I knew EVERYTHING about being a good mom… Well I remember thinking how my children would listen and respect me WITHOUT discipline, because I would instill those character traits in them.

We wouldn’t need to worry about yelling and time-outs because discipline would be a moot point.

Enter actual children into the picture, and all those pipe dreams went down the drain.

But I like to think in the actual role of being a mom, I have learned a lot about myself in learning to discipline my children.

What makes me feel like a good mom in doing the inevitable of raising kids.

The Truth about Disciplining Kids…

Don’t let anger control you.   Remember that little example earlier about me popping my daughter? Well, it was a VERY revealing moment for me that night. I learned that when I am angry, I should walk away.  Not because I’m going to lose my control and beat my children, but because NO GOOD CHOICES CAN BE MADE WHEN YOU ARE ANGRY.

You are the parent. If you aren’t cool and calm, then no one will be. That little pop 5 years ago was our last “spanking.” I found that if I resorted to physical discipline, I was simply angry.  That wasn’t going to work in our house.

2. Stand Your Ground While Disciplining Kids

You had better think long and hard before you throw out any ultimatums, because you need to stand by what you said. My husband is notorious for saying something absurd like,“If you don’t get along with your sister, we’re not going on vacation next week.”

3. When You Discipline Kids, Remember The 10 Second Rule

Remember when I said that anger can’t be your guide? Well, I still get angry sometimes, and anger clouds my ability to think up rational punishments. Step away for 10 seconds.

Sometimes (a lot of times, actually) this is what I tell my girls:

“I am so frustrated right now. There will be a punishment for what just happened, but I need a few moments to think about what it’s going to be. I’ll let you know as soon as I decide.”

Now I’m free to think up a reasonable punishment that is proportionate to the “crime,” and I get to come to that decision once I have cooled down.

4. Choose Your Battles When Disciplining Kids

In the beginning of being a mom, I had these ridiculous notions of my well-behaved children. The ones that would be quiet when they were supposed to, would always say please and thank you, and never argue with their friends or siblings. But that is not real life.  Nor should it be!

It’s about talking when you’re not supposed to. Giggling for no good reason. Taking toys from someone and seeing how your actions can impact someone else.

It’s about being silly and loud, and learning when those behaviors are okay, as well as when they aren’t.

I’ve had to learn to resist the urge to “stop” all behavior that don’t look “mature.” My girls aren’t mature. They’re children, so yes, in church they need to be quiet and respectful.

But in the car? It’s okay to go insane and sing as loud as you can, maybe even scream a little.

5. You won’t feel good when you discipline kids… it isn’t easy.

I always feel awful when I discipline my kids. There isn’t an easy way around it.  It’s an odd mix of guilt that I’m having to do it, and guilt that I may have let my girls down. Which I know is crazy, because it’s our job to teach them right from wrong and show them that there are consequences.

But there has not been a single time-out or privilege lost that I’ve not felt a lump in my throat. Which I think is good – it means I’m doing what’s right, even when it’s hard.

Remember, we are raising our kids to be responsible.   Disciplining, as unpleasant as it is, is just a part of that. As Dr. Louise Hart once said, “If we don’t shape our kids, they will be shaped by outside forces that don’t care what shape our kids are in.”

Hillary loves being a SAHM to her two little girls where they fill their day with baking, messy play and being "not perfect." She blogs at The Cole Mines and you can follow her on Facebook, Twitter, and Pinterest for more tips on being the best mom you can be.