Listen up Dallas! There is more to discover in our bustling city than malls and football games. Trust me, I too race to the twice yearly sale at Nordstrom's and there's nothing quite like the thrill of watching the sales lady at Neiman's open the David Yurman case so I can slip something on from their newest collection. Likewise, there's something comforting about standing in line at Tom Thumb on Sunday, surrounded by fans in Romo jerseys, anxious to get home, start cooking and cheering on Da ™ Boys.

But on a Saturday morning, before the malls open and there's no chance that the screen at the new Cowboy's Stadium is lit up, get out there and try something different! Yesterday, my hubby and I did just that; we went kayaking around Grapevine Lake.

I first kayaked several years ago with a ladies trip. In the ocean, off the coast of La Jolla, California, we kayaked in and out of sea caves. It was thrilling, and I was hooked. Since then, my husband and I have taken lessons, and hit the water several different times. We really enjoy the peace and solitude, now that we're not so worried about tipping over.

This weekend, we rented two different kayaks from Heart of Texas Kayaks in Grapevine. It's a new place that's only been open since July, but they ™ve got a variety of boats for sale or for rent. On Friday, I picked out a 14 ™ closed hull for my husband, and an 11 ™ open air for myself. If you’ve got kids with you, you can rent a tandem kayak and plop them in the front so you can keep an eye on them!   The rentals come with paddles and life vests.   I loaded  the kayaks  onto the roof of our SUV (that is another story in and of itself, but there are no scratches on the car) and drove home.

Saturday morning, with the car already loaded, we packed our lunch and headed out to Trophy Club. Someone had tipped us off to a little known boat launch on Marshall Creek. Other than a couple of fishermen, and a ton of tricolored herons, the place was quiet. We easily slipped our kayaks into the creek, and headed against the current toward the lake. The fish were jumping and they were huge! I should call my fisherman dad and find out what they were, Pikes maybe? White egrets nestled on dead branches, and if we were quiet enough with our paddles, they didn't fly off when we floated by. Cruising down the waterway, it's hard to imagine that you're within walking distance of well over one million people. Marshall Creek is lined with trees, so there was plenty of shade as we paddled, and the rustle of the wind in the leaves was soothing. The creek widens out and gets a little noisier as you near the lake. On the right bank there's an off road area, so there were plenty of dirt bikes and ATV's tearing up the trail. Around the next bend, the noise of the motors is gone and the lake comes into full view. It was a spectacular day with a breeze strong enough to cool us off, but not gusty enough to fight our navigation. We paddled across the lake to look at some beautiful homes then sat back and drifted while we had lunch. After an hour, we decided to head back to the launch. This time, we were floating with the current, so the two and a half mile journey was a little easier. 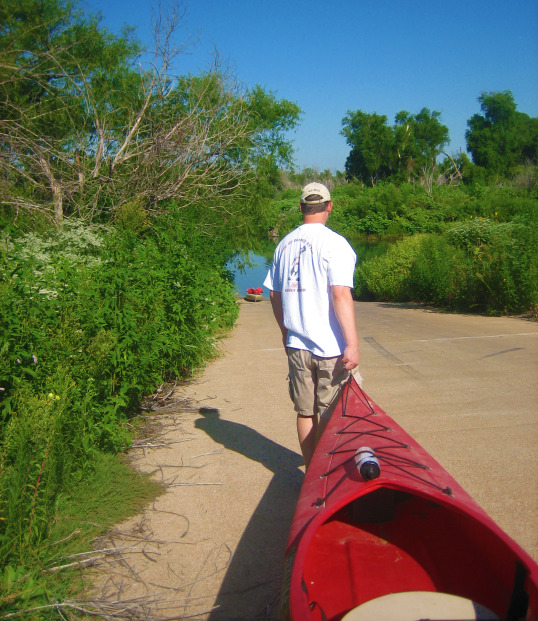 Back on dry land, we assessed the damage; two sunburned knees (his), two sunburned lips (mine) and one mysterious arm bruise (his). We loaded up the kayaks, much easier with someone who is over 6 feet tall, and drove back into town. It was nice to get out and get some fresh air and best of all, we made it home in time for the Cowboys game.