So how did Nirvana begin? 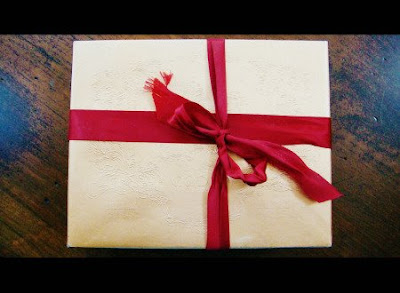 On Fridays I only had classes until noon. I usually worked in the afternoon, but this particular Friday I did not. I went over to blog-Stedman’s Southern California apartment and promptly fell asleep in his double Papasan – it was the early 90s and he was on the leading edge of decorating style.

While I was asleep he cleaned the entire apartment.

That should have tipped me off right there that something was up.

When I woke up he had started on dinner. As you know I am not a cook, but he is. He makes fine dining restaurant quality food that takes patience and skill to prepare. I hung out at the little eating bar while he cooked.

I picked out a chocolate from the box and when I lifted it out of the wrapper a letter floated to the table. A single letter of the alphabet. It was cut out randsome-note style.

Being curious, I started lifting all the chocolates and finding various letters tucked under each treat.

I pulled out the letters and started to unscramble them…

The ring was in the special foil wrapped chocolate covered cherry.

There was hugging and kissing and crying and at some point I think he got on bended knee.

Are you SURE that is what it spelled?