And I am so glad I did because one of my very favorite bloggers reminded me of this post. I love this journey into the land of Barbie. A very distant and foreign country from my house. A big thanks to EATPLAYLOVE for rescuing me. And now we know what she was making room for in her garden by vacuuming bugs:

Let’s take a moment and envision the “closed doors” meeting at Mattel, the unearthing of a brand new Barbie. All the details are meticulously planned out, right down to the packaging. Hundreds of hours of overtime have gone into the final product. Large glossy color posters adorn the board room.

Eyebrows raise at the unveiling, side conversations begin. It’s the birth of a new Orange County Barbie. The executives are in love. Simply in love.

Just for the sake of detail, let’s even imagine an argument ensuing over the number of twist ties that hold the O.C. Barbie into her packaging and the sewing of her hair onto cardboard to create the perfect effect. The argument was a shot in the dark, from a real life mother and top Mattel Designer, to give all of us consumers of Barbie a voice at last. She knows what it’s like, ripping into the box, can’t move your hands fast enough, the scissors get caught up, all while a four year old is screaming, “I WANT IT NOW”!

The new, latest and greatest Barbie hitting in mass quantities at every local big box retailer straight off the boat from Taiwan (so Mattel can boast in today’s climate, not made in China) is complete with a twenty piece line of accessories. Cell phone, purses, a small arm held pooch, lovely black eyeliner, gravity defying ta-ta’s, a gorgeous hybrid convertible, and a Laguna Beach House. Orange County Barbie has it all.

But what the executives fail to see, is after her newness wears off, Barbie sits in a bin with the other cast off Barbies. Crammed to the gills, next to accessories, clothing, missing shoes, brushes, and glitter. Her hair becomes rather nappy in a gorgeous Hippie Barbie kind of way. Maybe someone even brought her into the bathtub and applied bar soap to her shiny coiffed locks.

Eventually her Laguna Beach House is replaced by some other latest and greatest marketed toy. And then it happens, it finds it’s way into the backyard, because no mother in her right mind would house and unwanted Barbie Beach House in the confines of a organized bedroom or playroom to collect dust.

See these days, Barbie is rolling up in her Tonka Dump Truck, to her weathered abode. Shaking her head and wondering where the good old days of glamour have gone?! 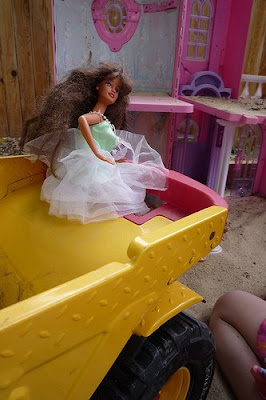 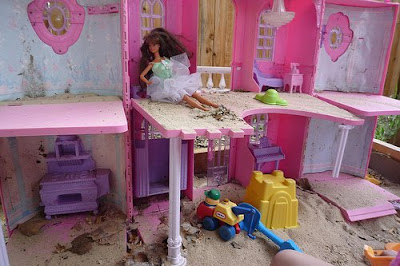 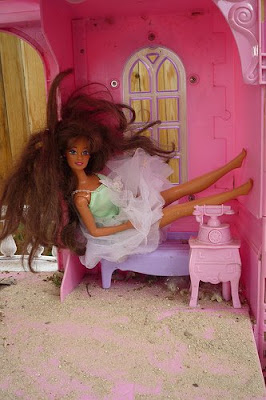 ***The identity of this Barbie has been changed to protect her innocence in the Blogosphere. Please note, she sold her diamond ring to pay for back taxes on her house when her secondary role in Sex and The City was cut.

Thanks EATPLAYLOVE so much…and yes the check is in the mail.
*cough*