Today’s potluck features all the food of the world except for brussel sprouts. My friend (and fabulous author of Sleeping with Ward Cleaver) Jenny Gardiner has made the following request:

Please, no brussels sprouts. I can’t even abide a no-thank you helping of them!

Nooooooo problem Jenny. I agree. We are just saying no absolutely not.

***
And now
for a new
Nirvana feature…

Proofreading Holly‘s writing with blog-Stedman!
(and you thought I couldn’t top the coccyx segment…)

In the 10-23-08 post What General Mills doesn’t want the Mommy Public to Know the following picture and statement are included: 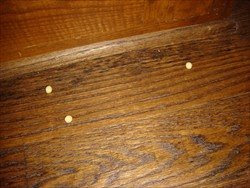 This is a picture of 3 rouge KIX that were found yesterday in my living room approximately 35 feet from the closest table.

Blog-Stedman’s analysis:He believes that I might have meant “rogue” instead of “rouge”.
Holly’s rebuttal: Crap. He’s right.
*** Yeah for Google this week! I received a visit from someone who Googled, “anvil nirvana” which coincidentally was an alternate title for my blog and another visitor (OK, in full disclosure I can’t be SURE it wasn’t the same person) that arrived Nirvanaside after an “aquaskipper girl” search.

In this second step of my plan for world wide web domination, I am slowly dominating all obscure search phrases starting with the letter “A”.

A tad bit better this week. Thanks for asking!

Chicken of the Week!

Thanks to all who linked in the “it’s not me, it’s you” marital extravaganza. There are some REALLY funny stuff listed there–seriously, your spouses are lucky to have ya!

This coming Wednesday Mr. Linky will be taking links to posts about MISUNDERSTANDINGS. You know you have them!

In response to the post entitled, “At any moment roadrunner will run by with a BEEP! BEEP!” about the history of the Nirvana anvil:

For superior advice, Roger is Peep of the Week!

It was really difficult to choose Peep of the Week this time because there were a plethora (yes, I love that word) of EXCELLENT comments which included unusual things readers had “yelled” at their kids. I am going to start collecting these phrases for future reference. By future reference I mean to re-use them with my own children and also steal them for a future Nirvana post. So, if you have something crazy that you uttered to your children that you are willing to admit, please admit to it in the comments! A homemade Halloween card addressed to Reid and the remote control to my digital picture frame.

Why does a picture frame have a remote control? Isn’t it enough that my television has 7?

Please add to your comment something crazy you said to your kids!