You see, my sweet boy refuses to drink milk. When he was about 22 months old, we went on a trip to Cancun. Mommy bought some “milk” from room service, and it was NOT what we expected. It was fresh, but definitely not the American milk Reese was accustomed to. Ever since that trip, he has flat out refused to drink milk.

Every now & then, he’ll ask for hot chocolate, but a “cup of milk” is never consumed at our home. So what’s a mom to do?

Well, I put milk in anything I can find…I make his Malt-O-Meal with all milk instead of water. I add cheese slices with extra calcium into his Mac&Cheese. He takes calcium vitamins. He loves mashed potatoes, and when Jeff watched Unwrapped on Food Network and found that instant potatoes were 100% real potatoes, just dried, I keep instant potatoes on hand and make them with lots of milk. But I’ve always felt it just wasn’t enough…

A light bulb went off one day. I had some powdered milk in the pantry that I needed for a bread recipe. And I got to thinking….why can’t I just sprinkle this stuff into his dishes? And it’s worked like a charm. 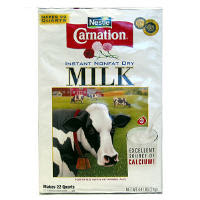 Where do I sneak in the powdered milk? Let’s see…

*Mix in a BIG helping into Mac&Cheese. Add some extra-calcium cheese slices, pureed carrots & more milk and you’ve got a really healthy option! It has a creamier texture but tastes exactly the same.

*Instant mashed potatoes…another BIG helping. It does not change the flavor at all (maybe makes it a tad sweeter?) and Reese will gobble this down. None the wiser!

*On PB&J sandwiches, I sprinkle some on the peanut butter part. I thought the texture might crunch a little, but he’s never said a word. And he is very picky about textures.

*Spaghetti sauce. No change in texture or taste!

*Casseroles like King Ranch Chicken & Baked Ziti…I throw it in with the sauce mixture & nobody knows any different!

*Pancakes, mix a big scoop in with the batter. It makes the batter a little thicker, but just add a bit more liquid (I use milk!) and you can’t tell it’s there.

*Ketchup…yes ketchup! I sprinkled a little powdered milk on, mixed and mixed. There were still a few visible pieces of milk, which Reese wasn’t sure about. I told him it was a bit of the cornbread from his corndog that I had dipped in, and he didn’t bat an eye after that.

*Any muffins…didn’t change the end result.

*Grilled cheese sandwich. Sprinkle on the cheese before you melt it.

*Meatloaf. Throw a little in with the mix before you bake it.

I think you get the idea. Things like sandwiches & ketchup get just a little (maybe 1/4 tsp at most), but dishes like mashed potatoes & pancake batter get a big scoop (about 1/4 cup). With the Carnation Powdered Milk, 1/3 cup powder is equal to an 8 oz glass of milk. I know the sprinkles here & there aren’t much, but anything I can do adds up in the end!

Between his vitamins, things that are already fortified, & the Powdered Milk added to things, I feel like we’re covering our bases pretty well now.

I was explaining my new found weapon to Jeff the other day, and he said “Oh yea. Bodybuilders have done that for years. Great way to get extra calcium and protein.” Guess I didn’t really come up with anything new 🙂

Come see what other sneaky things Heather is up to at Reese’s View of the World.