I know I say it all the time, but I really, truly love spending every day with Reese . He is just plain so much fun to be around! We get to take advantage of those mundane-moments-turn-silly! 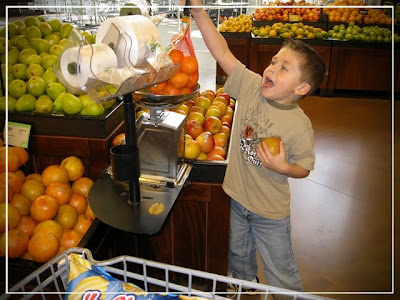 The other day we ran to WalMart for a few groceries. Reese has two favorite parts of WallyWorld…the bakery department where he can get a fresh mini-french loaf…and the produce department. 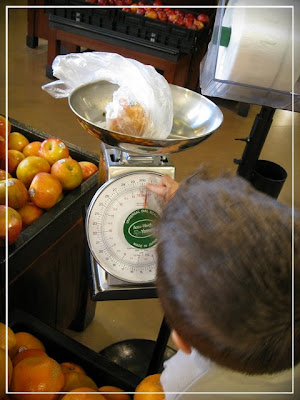 As we stroll through, he picks the type of apples he wants, checks for bruises, & bags them carefully. Lately, though, he wants to weigh everything! 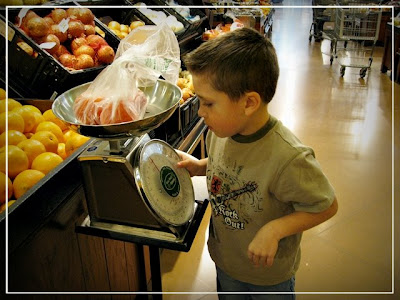 So we’ve taken the time to practice reading the scale. Which is made a bit more complicated because there are two sets of numbers…black for lbs and red for kg…and it makes it a tad confusing for Reese. He’s getting better at reading something that is “less than 1 lb”, and understanding that even though Mommy says it’s a “half-pound” and the scale is sitting on the number “8” (for 8/16ths) it’s one in the same. Confusing stuff, eh? 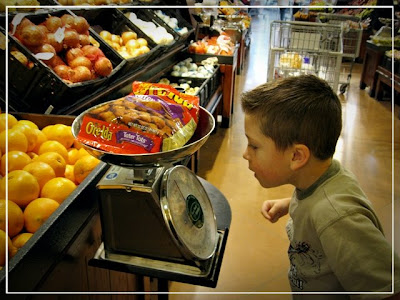 Then sometimes he gets a wild hair and wants to weigh everything in the cart! On this particular day we had plenty of time, so I let him go to town.

We thought we had discovered some false packaging…the tater tots said the bag was “2 lbs”, but the scale only read “1 lb”. WHAAAAAT? I checked it, Reese checked it, I checked it again.

Then a light bulb went off. We took the tots off the scale, and sure enough, the scale wasn’t calibrated properly and the little arm was behind the zero!   So we had a big discussion about how important it is when you measure to make sure you start at zero! 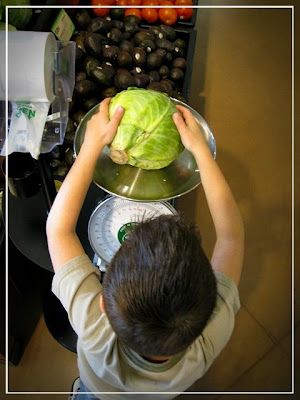 And then, since we still had time, Reese wanted to weigh things we weren’t going to buy! I had him guess the weight of this cabbage before he put it on the scale. The last thing he did was try to weigh his head, but he could only get his chin on the scale before I thought twice about that 🙂