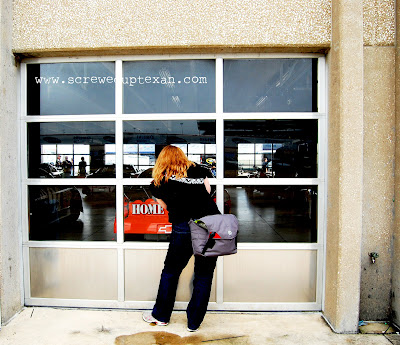 I’ve never looked forward to being in the pits before this last weekend. Deep down in the middle of the pits. No, not those kinds of pits. The racing pits. The NASCAR pits. Where the smell of grease and exhaust is entrancing and the smell of sweaty armpits ever rampant. Where I could have farted and should have blamed it on one of the rednecks.

Our Pit Tour got a jump start with our VIP passes–cause that’s how we roll. 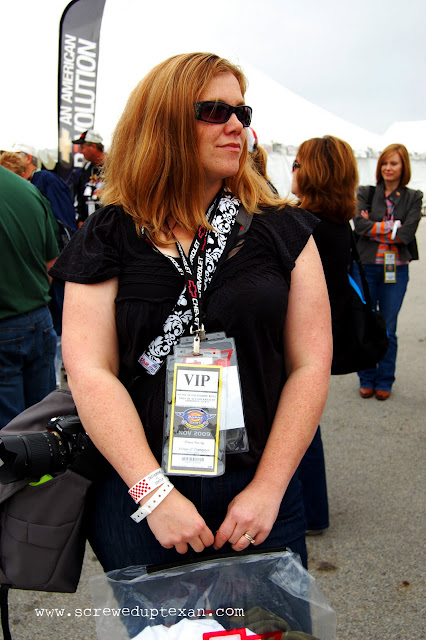 Oh, and this guy with the Chevy beanie who took our drivers licenses. 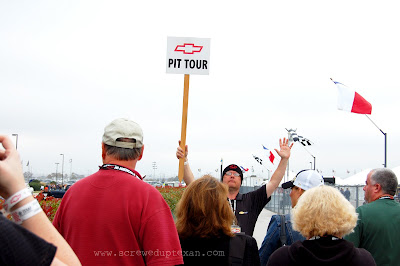 First, he led us towards the Texas Motor Speedway across the parking lot. I was ever so nonchalant snapping photos every few seconds. (In fact, in all I took over 700 photographs from the beginning of the day until after the races. Yes, I went a tad overboard. Like when I had to take a photograph of a Fort Worth fireman, well, just because.) 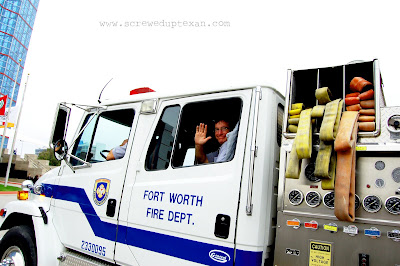 Remember how I told you that the VIP bathrooms rocked? Well, this is what everybody else had to use: 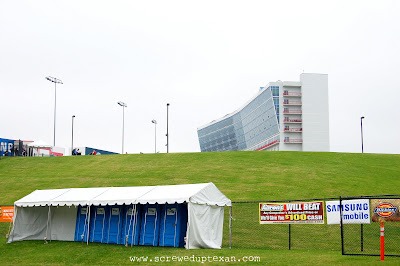 Notice no lines. Either someone puked in there or it’s the result of very careful placing by event planners. 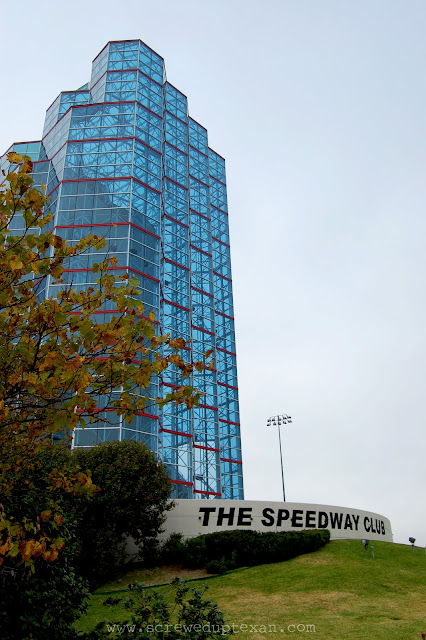 The inside of Texas Motor Speedway on our tour: 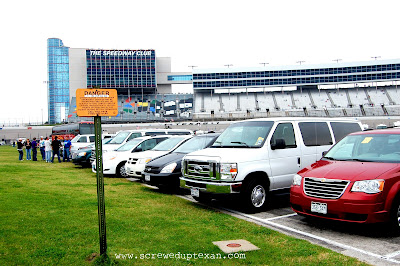 The guy who forgot which sporting event he was attending and was lucky he didn’t get decked by a drunk redneck for that mistake: 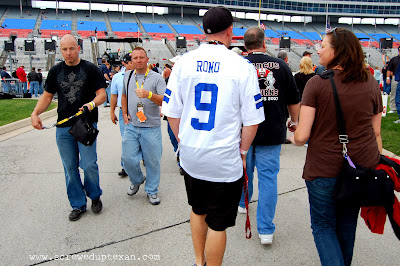 Then the guy with the Chevy beanie hat gave us back our drivers licenses and we were then free to wander the pits. 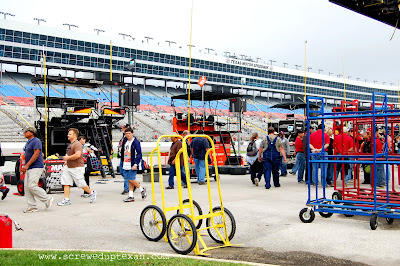 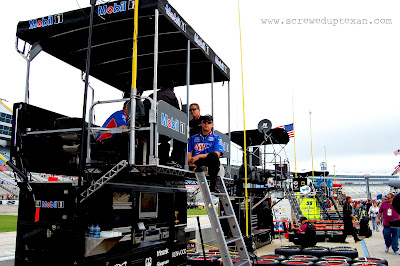 I have no idea what these dudes are doing, but they look like they are working hard. 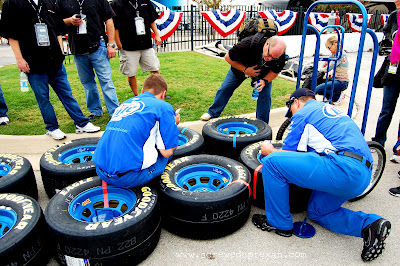 Unlike this dude who looked like he was hardly working. My friend, Andie, even asked him, “So, are y’all playing Go Fish up there?” That got him to smile. 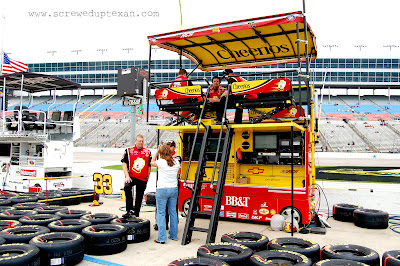 Post Script: Andie and LaShawn are in love with #33, Clint Bowyer. I think they’re gonna be eating Cheerios and Hamburger Helper the rest of the month. Who ever said that Cheerios and Hamburger Helper were just for broke college students, cause Andie and LaShawn sure didn’t get the memo. (I speak from experience here folks, having been a poor college student once in my lifetime. Crap. I’m still poor. Just not in college anymore.)

Need proof? I bought a lug nut off the Dollar Menu at The Pit: 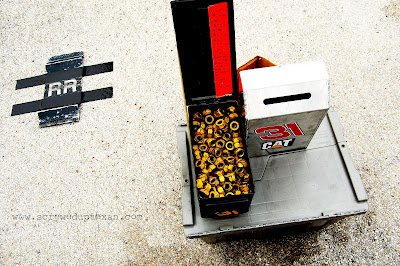 And I discovered where the best mechanics in the world work. Their specialty–Bare Bond. Bera Bond. Bear Bond. Like duct tape on steroids. I hear they use it to silence the whiny drivers. 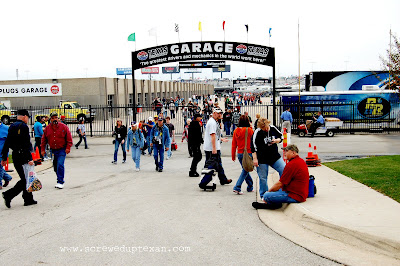 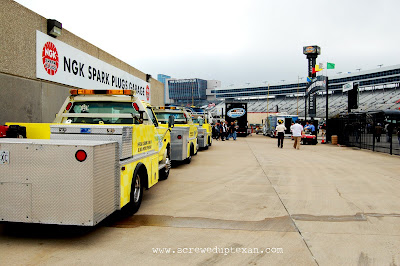 Then it was time to find our seats in the Grand Stands before the Dickies 500 began, so down the tunnels we went. 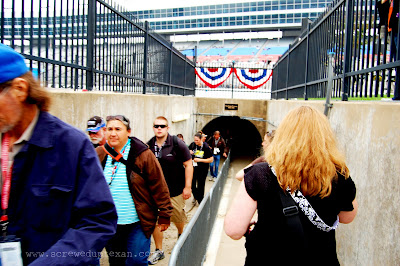 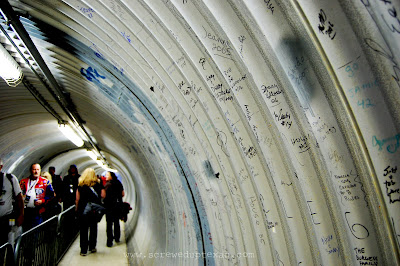 There was writing on the wall which reminded me of this song:

Not a very good racing type song, and I really can’t imagine any NASCAR driver actually listening to it cause I think it’d either slow them down or make them crash. Wait. Maybe Jimmie Johnson…

What he should have been listening to was this:

Why exactly I’ve become a NASCAR fan I can’t entirely figure out. Certainly it has something to do with my Chevy VIP experience for my first time ever attending a NASCAR race, yet I’d like to think it also has tons to do with my curiosity for everything fast-paced, down home, dirty, and redneck. 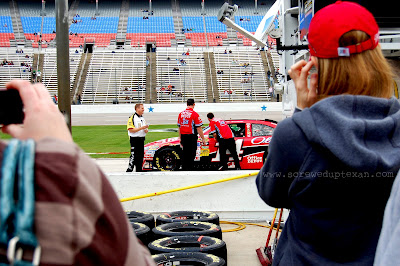 Probably because it’s the only sport I understand. Turn left, be the fastest, tape your fender, fill up with gas. Perfectly straight forward.

Stayed tuned…there’s still the Dickies 500 race to come. How I’m supposed to make that funny, I haven’t the slightest.