It all started when I declared early November that I was pulling all things Christmas from the attic and going through each and everything with the goal to decrease my Christmas crap by 75%.

I have 20+ years of Christmas collecting, 7 moves including a 3 year storage unit, and the uncanny ability to block a mess out of my mind if it is in the attic.

It is the perfect storm for a special holiday edition of Hoarders. 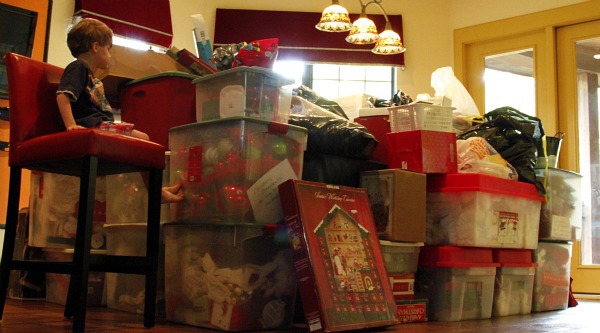 It took weeks to go through everything with help.   I was excited to put up the tree and a few accessories and return less than 25% of the boxes to a very roomy attic.

In the process of the sorting, I came across our Liberty Falls Village.

Well, due to rapid growth it might be re-classified as Liberty Falls City.

Blog-Stedman and I started collecting Liberty Falls cottages right after we were married.   They were featured at large department stores one a week for 5-6 weeks leading up to Christmas.   They were $5 a piece and we he made sure that we didn’t miss a week…in years.

I know you are looking at that and saying to yourself,

Holly, that is pretty impressive, but those are only the early years of Liberty Falls Collectibles!     But what about: 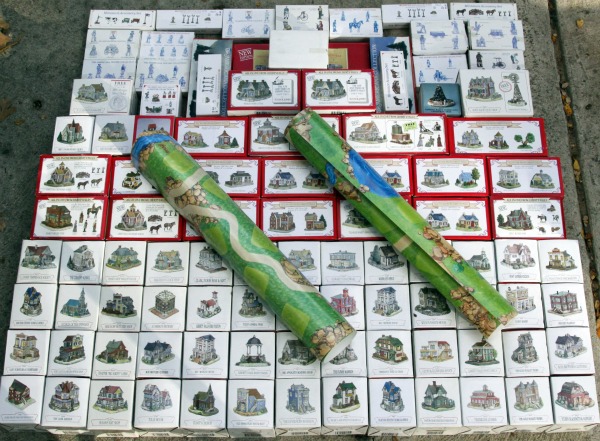 It is a massive Liberty Falls collection that has been taking up storage space for over 15 years.

I haven’t put them out at Christmas since 1995.   It is just too overwhelming.

I approached blog-Stedman with the idea of finding a new home for the collection.   He was surprisingly receptive and went off to do a little research.   He came back a few minutes later and said that he had found websites where the houses were listed for $15 – 30 each!

Holy crap.   Our kids are going to a fancy college!

It would be much easier for us if we could find a buyer for all of them at the same time so blog-Stedman went back to the computer to see if people were selling Liberty Falls lots on eBay.

He came back a few minutes later and said that what people were BUYING them.

and it was priced very reasonably.

Previous Post: « Advent Calendars: Counting Down to Christmas
Next Post: Don't be a Griswold: New Rules for Holiday Lighting »