This was the scene last time the Nirvana covered the Optimus Prime story (November 2008): 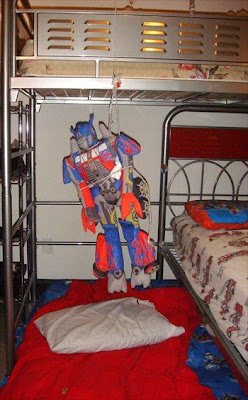 Optimus Prime, recognized leader of the Autobots was found hung from the Nirvana boys’ bunkbed at 6:02 p.m., Sunday, November 9, 2008.

There was no indication of foul play.

Texasholly went on to say that neither she, nor anyone else living in the house has any affiliation with the Decepticons.

Where is he now?

It appears that Optimus Prime may have had help in faking his death in an attempt to relieve himself of the pressures of   Autobot leadership.

Despite the grizzly details from his November 2008 “accident”, he made a full recovery and has been living under the Autobot/Decepticon   radar.

He now resides happily in the suburbs of Texas with a colony of faux-snakes.