Ever since Ryan(8) started to talk we have suspected that he has a future in the legal profession. He has shown excellence in the field of debate. He has a passion for justice. He has a gift for finding the loophole. 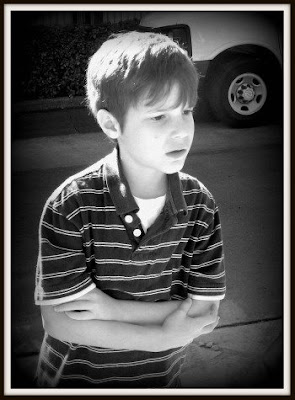 Should we send him to third grade or law school?

I am now wondering if any sort of school is necessary…maybe we should just send him straight to Congress.

He has placed earmarks in the Nirvana budget through creative interpretation of the law.

The law: The boys each get a weekly allowance according to age. On each birthday their allowance increases by $1 per week.

Ryan recently had a birthday so his allowance was increased.

Blog-Stedman and I then overheard him calculating new allowance rates for both Reid(5) and Rhett(3) whose birthdays are in June and December. These calculations were made with plans for increased brotherly spending on his behalf.

Me: Ryan! Reid and Rhett’s allowances won’t go up until their birthday. Only yours goes up this month.

Ryan: *with a twinkle of understanding in his eyes* You said we get an extra dollar on EACH birthday.

At that rate he will be receiving a Congressional salary before getting out of middle school...