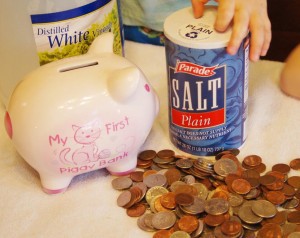 This activity kept my kids happy and playing for well over half an hour! It was so easy to set-up. All we needed was some white vinegar, a couple tablespoons of salt and some coins. For my sanity, we used a few bowls and towels as well to contain the mess. 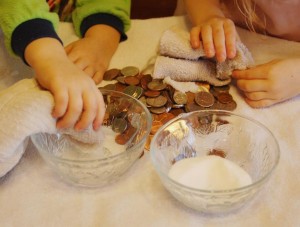 First the kids dipped their rags into the vinegar and salt, then they scrubbed the coins. It was fun to watch the acid from the vinegar remove the dirt, grime and corrosion – those pennies really began to shine! The kids were curious as to why the dishrags were turning green and we had fun discussing how metals like copper break down and their rust is a bright blue/green. 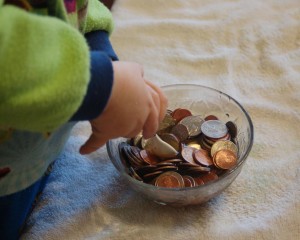 My son is always the pragmatic one. He figured out that it was quicker to get the coins clean if you soaked them for a few minuets in the vinegar before you dry them off. His hands smelled really “pickled” but he had a blast! 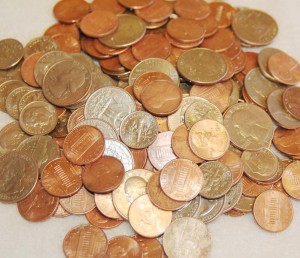 After we were done, we counted our coins, discussed the differences between pennies, nickles, dimes and quarters. We compared piles of coins – which pile was worth more? Which pile had more physical coins? Which pile was the brightest? etc. I noticed that we had several coins from the 1940s and 50s in our pile! I was amazed at how long they had been in circulation.

If my kids were a tad bit older I would have had them graph the dates the coins were minted, and put the quarters on a map of the states, matching the back of the quarter with it’s corresponding state. Maybe we would have even played a money growth game.   Alas, that was a bit much for my two and three year old preschoolers.