My son made up this game.   He calls it The Bathtub Alphabet  Soup Game.   It is easy to play, fun, educational, and very clean! (affiliate link)

I recently purchased some foam letters “ the ones I have are not specifically for the tub, but I see no reason why I couldn't use them there.   So, one day, when my son was taking a bath, I opened up the package and dumped them in.   That's when he told me he felt like he was in a bowl of alphabet soup.

The first round of this game started with just asking him which letters he knew as they floated by him.

We also discovered that they stick to the tub wall when wet.

Then, the game evolved.

I took out three letters (E, X, and A) and rested them on the side of the tub.   I asked him if he could identify the E.   He was right, so I told him that he got a point.   He then took the E and slapped it on to the tub wall like a trophy!

When his back was turned, I replaced the E with the letter Z.   Then I asked him to find the letter A.   When he found it, he added it to his trophy wall and I again, filled in the blank spot.

If he didn't correctly identify the letter, we simply put the letter back into circulation and would try the same one just a few turns later. 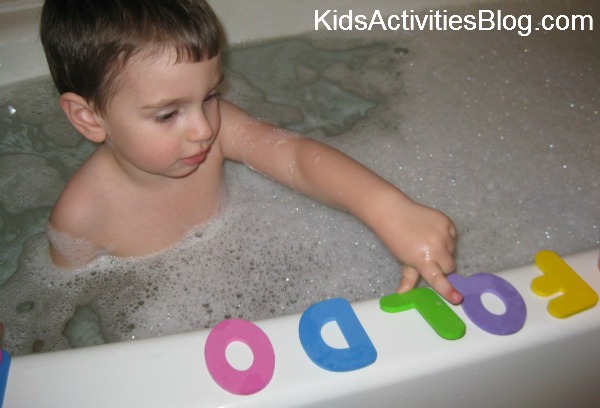 We played the game like this the first few times.   As he got more familiar with his letters, we decided to make it more challenging.   So, we increased the choices to five letters at a time (and sometimes seven).

My son has also informed me that the bath needs to be extra bubbly because the letters stick better with bubbles.   Who knew! 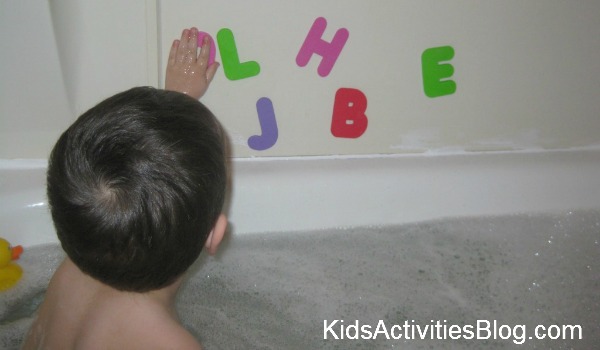 I am sure we will eventually come up with new ways to play with these letters, but in the meantime, he is learning his alphabet while getting clean.

It's quite an educational way to multitask!

Oh what a fun way to learn!   Let’s see what other fun learning games the Quirky Mommas have found…