Blog-Stedman and I had cats out of wedlock.

I know it is shocking. 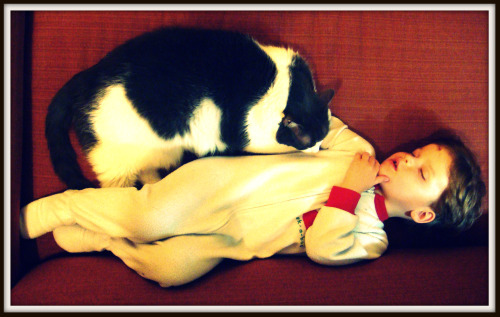 Before we were married we were living in California.   He was in an apartment in the Redlands Lawn & Tennis Club – believe me, it wasn’t nearly as swanky as it sounds.   I mean it wasn’t exactly false advertising…there was lawn and there was tennis...but the club part may have been a slight exaggeration.

Next door to his one bedroom apartment lived a single mom of a 7 year old girl.   The daughter was home alone so she spent a lot of time over at his place when I was there.   She had two cats.   The cats both had kittens within 3 weeks of each other which was timed perfectly for her mom’s midnight move out of town followed by a visit from the Texas Rangers trying to hunt her down.   Anyway, the neighbor’s hasty move didn’t include the relocation of a grand total of 11 cats.   Those were left on the patio to fend for themselves.

So, their cats became our cats.

When the kittens became old enough to give away, we did so.   Except for one who became ill and I nursed back to life.   That is how we ended up with cat #1: Tigger.   I couldn’t part with her sweet little tiger-striped self.

And then about 4 months later one of the kittens we had given to a friend was returned.

Yep. My friend returned the cat.   After the cute period.

And after naming her Hillary.

And that is how we ended up with two cats.

Soon after blog-Stedman and I got married…just to make our little family legitimate.

And then 6 years later we adopted another cat.   We figured there wasn’t much difference between two cats and three…this is exactly the slippery slope thinking that gets cat people into trouble.

Scooter was a part of a litter that was abandoned one night in a thunderstorm near a friend’s house.

Anyway, three it was.   Tigger, Hillary and Scooter.   They were all pretty dysfunctional individually, but together made a semi-functioning team.

Tigger died awhile ago.   Hillary lived on about 6 additional months.

That has left Scooter.

The lone man-cat.   The man-cat alone.

Before you shed a tear in his behalf, let me mention that he is crazy.

Not officially, but obviously.

He is the sweetest, purringist, rubbingist, lovingist sugar lump of a cat one minute and a spawn of the devil the next.

He will be cuddled up on my lap while I watch TV in all his purring cat glory and then randomly without warning it is WHEN ANIMALS ATTACK.

People are scared of him.   And for good reason.

The funny thing is that those people are adults.   For some reason (probably a subconscious self-preservation) he acts differently with children.

He is still ornery, but not evil.

He will let a child maul him, but just give a warning bite to the hand – never breaking the skin.

He will let a child lay on top of him, but get up and leave when he tires of the play.

Quite honestly, it is crazy.   He is really good with the kids and really awful with the adults.

Reid named him Scratchy a few years ago –Scratchy because he likes to be scratched.

Scratchy it is…among the children.

Scooter it is…among the wounded adults.

Overall it seems to fit.

He is the bipolar cat with two names.