Jumping Macaroni!  That is what this wacky science experiment for kids did – we made our pasta jump about ten inches high, up and out of the bowl!  CRAZY cool.

Many thanks to Steven Mould.  He is the physicist who introduced us to  this effect (it’s been named after him!).  Since we saw his self-siphoning beads and “The Mould Effect”, our kids can’t stop making things fly out of dishes!

What you need for your Experiment: 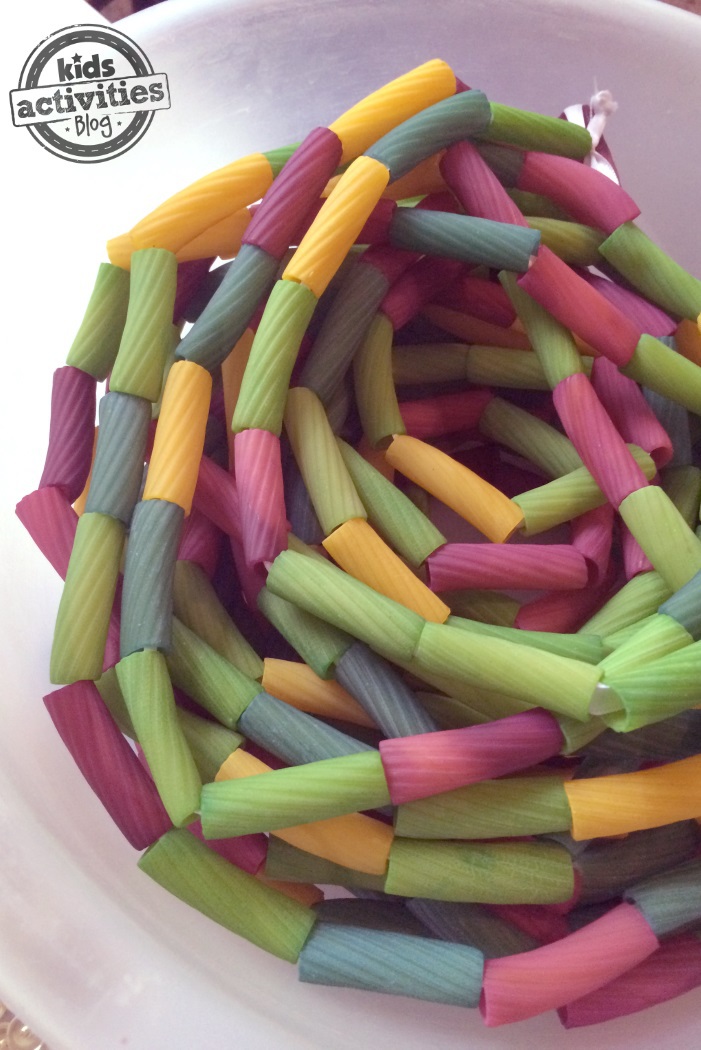 We dyed our pasta – cause everything is more fun when it is full of color. Also  it really helped the pasta be more visible as it flew out of the bowl.  That is super handy as this experiment is fast, like it takes seconds.  Dying your pasta as well as using  a phone to tape the activity and watch it again in slow motion will help your kids understand the experiment.  The macaroni jumps so fast that they may not know what they just saw happen.

String the pasta along the ribbon.  It will take awhile – but you want to string at least three boxes along your ribbon.  You want the noodles to be tight against each other.  If you do this experiment a few times you will need to tighten the pasta between rounds.

Put the pasta rope into your bowl.  Spool it so the noodles don’t become tangled.  If possible do this experiment over a set of steps.  The farther the drop the greater the effect.

Just drop your pasta over the bowl edge and gravity will begin to pull the noodles.  However, instead of falling over the edge of the bowl, the pasta jumps higher and higher out of the bowl.

Want to know why it worked?  Check out the explanation over at Steve Mould’s Science Site.

Our first “Mould Effect” test was a simple bead fountain.  As the gaps between the beads was greater we did not see a true “jumping” but we did get to see the flow of inertia as the beads pulled each other out of the jar at rapid speeds.  Great fun for our preschoolers!

Previous Post: « This Baby Loves The Beach And It Isn’t Even Born Yet!
Next Post: 10 {Fun & Unexpected} Ways to Battle Bedtime Fears »