She started out as an only child.

Pampered.
The objection of affection.
Celebrated. 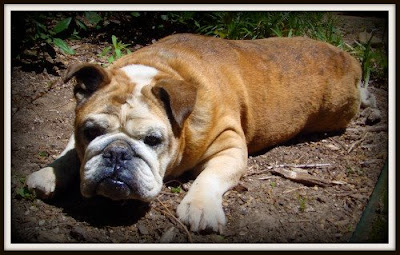 She had the run of the house.

I mean she ran the house…

And then a human baby came along.

She was fine for about a year.
Continuing as before…
until the human baby started walking.

Then her 50 lbs. of bulldog exuberance became a problem.

She is the most hyper bulldog I know.

She would get excited and jump.

During that first year the human baby seemed to always be CONTAINED in something.
A swing.
A bouncy seat.
A walker.
A bouncer.
A stroller.
A crib. 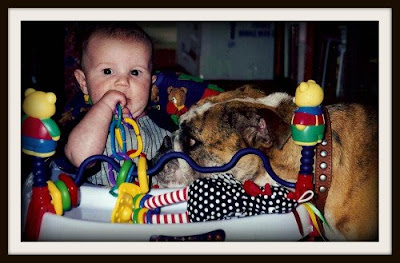 These were all Abby buffers.
Human baby safety bubbles.

When human baby began to walk.
He walked AWAY from the safety of the buffers.
He walked TOWARD Abby.

It was just too exciting for Abby – she needed to greet human baby with 50 lbs. of bulldog exuberance.

She needed to be put outside.

And that is how Abby ended up an outdoor dog.

As she aged she has gotten less hyper. As she aged I have gotten more children.

She is still 50 lbs. of bulldog exuberance when the kids go outdoors to play.

For awhile I put her in a different part of the yard so she wouldn’t knock them down. Now that both the kids and the dog are older I figure the kids can outrun her.

Ryan (8) doesn’t have a problem with the dog. He just has a problem with not wanting to go outside sometimes. The other day we had friends over and this was overheard:

McKenzie (8): Your dog is so cute.
Ryan: Does that mean you want to go out and see her?
Yes! Let’s go out and see her.
You don’t want to do that.
Why?
Our dog always bites new people.
Really?
Yes, our dog has bit me several times.
Oh.
Let’s go upstairs and play.
OK.

To set the record straight – Abby has never bit anyone in her life.

Blog-Stedman addressed the lies immediately. The next morning at breakfast I could not stop thinking about it and brought it up again:

Me: Ryan, why would you tell someone that Abby bit you?
Ryan: Well, she might have tried once.
I would NEVER have a dog around that would bite! Never.
Don’t give away Abby! I love her.
Why would I give her away?
Because she bites people.
But she doesn’t. Why would you say that when it isn’t true?
Please don’t give my dog away!

Yes, this argument could have continued in this circular manner for hours. By the end of the conversation I was on the defensive. Assuring him that the dog was going no where.