When you’re a kid, you say no to drugs.

When you’re a parent, you say no to tugs, hugs, slugs, and bugs–and any other manner of verbal or physical assault designed to persuade you to purchase an ICEE/let them stay up late/invite 14 other Kindergartners over for a sleepover/all three.

It’s okay to say no. 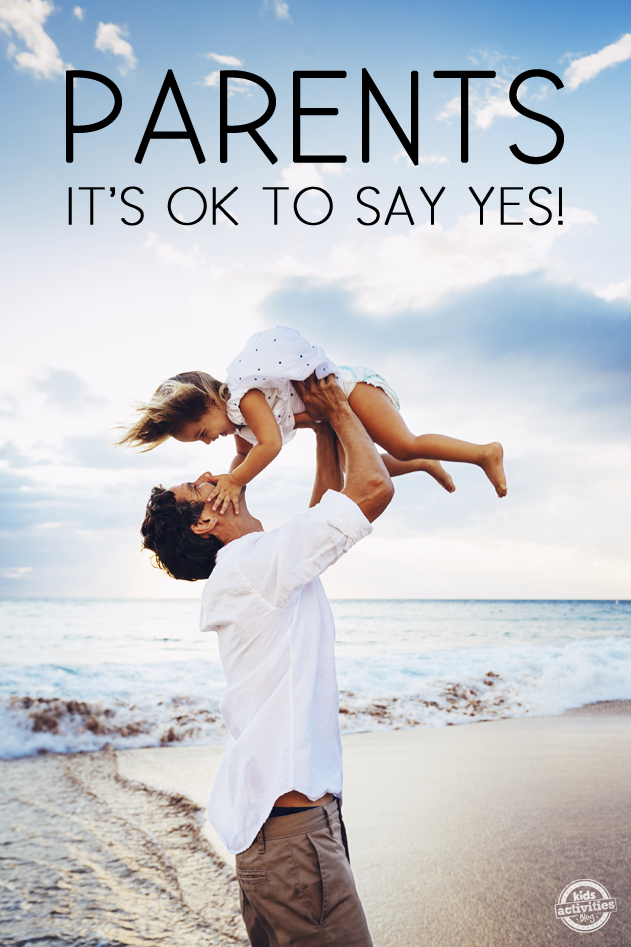 “They’ll walk all over you.”

“They won’t respect you.”

“They’ll grow up to be spoiled brats.”

We’re encouraged to be tough, to be strong. “You go, girl! Stick to your guns!” And saying no is a good thing, obviously. If I don’t want 15 overtired five-year-olds in my house from sundown to sunup, I am not just entitled to refuse, I’m smart to do so. And even if it’s a smaller thing, letting the kid think she can have anything she wants, or can easily wear you down by constant nagging, isn’t going to do anyone any favors.

But we get so caught up in the message of no that sometimes we forget the opposite.

The other day, I was reading a parenting book. Now, those who know me know my disdain for parenting books and magazines. I’ve left a trail of half-read “the real way to parent” claims discarded in the dust as the Maiden and I have progressed from stalemate to stalemate. For once this book didn’t claim to have all the answers, but it did have one suggestion: sometimes, say yes.

It makes sense. When you have a child who’s a little more difficult–let’s say “spirited” and “tenacious” rather than “wild” and “stubborn”–you find yourself saying no so many times that it becomes habit. In fact, saying yes seems somehow wrong.

No, you can’t eat treats on the way home from school. Especially not before dinner.

No, I can’t stop making dinner to help you put away the dolls I told you not to make a mess of.

No, you can’t stay up late tonight.

No, you can’t play with my scrapbooking tools.

And then I suddenly realized that actually, just once in a while, yes, she can.

The world doesn’t end if we bend the rules and allow that before-dinner treat on a rare occasion. Or if I let her have the 60-cent scrapbooking paper and then–gasp!– use my good stencils on it. It doesn’t mean we’re giving in to her nagging. It doesn’t mean the Maiden will turn us into her minions, slaves to her every whim.

Actually, it’s quite the opposite. The Maiden will always ask. Often the answer’s no, and that’s okay. But now that the answer’s sometimes yes, she’s suddenly more secure. She doesn’t need to ask 24,000 times because she knows that next time, I might not refuse. My nos have a higher level of legitimacy now that they’re sprinkled with the occasional yes.

There’s nothing wrong with a kid asking for something, any more than there is with an adult doing the same thing. But so frequently we parents treat any requests as assaults on our Fortress of Good Parenting. Saying yes once in a while doesn’t just make our child momentarily happy, it also sends a clear signal that we’re considering their question, that we’re treating them like an adult instead of like an automated button we need to press. In the end, our relationship grows and develops a base of trust.

And that’s something nobody could say no to.

Behind Kids Activities Blog is a team of Quirky Mommas who are passionate about helping moms homeschool preschool,, find fun things to do with their kids, and survive motherhood each day!