Today is super fun.  It is a project that my boys and I have been planning for awhile.  They love to make stuff and I wanted to try Mod Podge ®  Sparkle.

We are now ready to unveil our masterpiece… 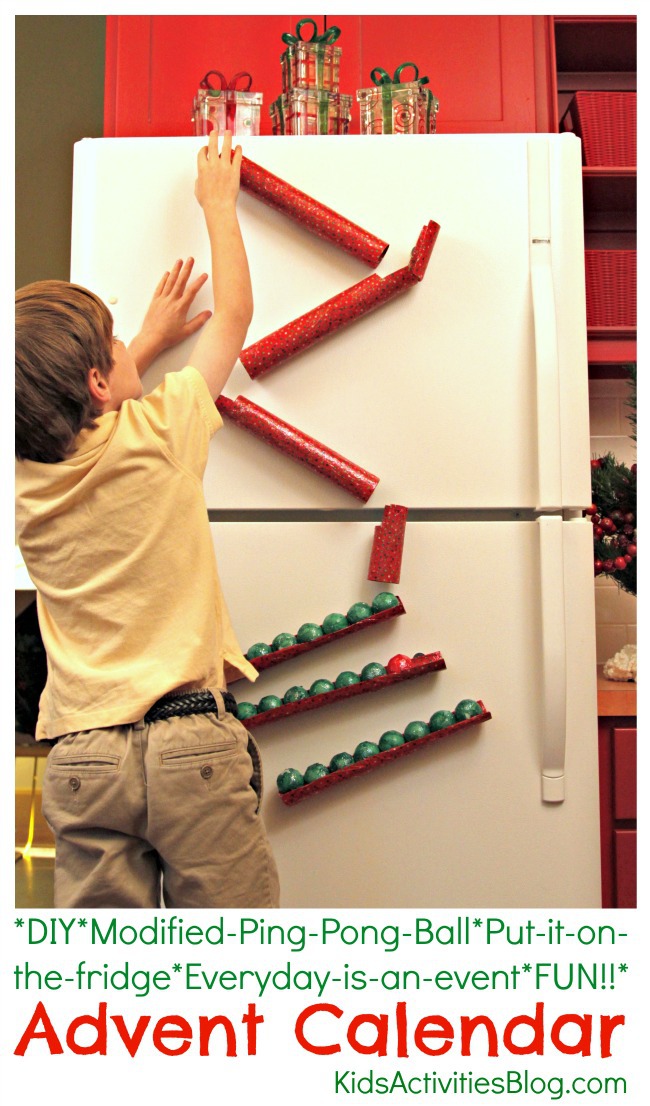 It all started when I was thinking about how the boys love their marble tracks.  I then wondered if ping pong balls would fit into upcycled toilet paper and paper towel tubes.  The answer is YES!

So, I bought 100 ping pong balls for less than $10 and sought out to build a track using the left over paper product tubes.

Why NOT an Advent Calendar?

That is where Mod Podge ® came into the picture.  I wanted to be able to disguise the materials and make them all Christmas-y and fancy.

We started by tearing up two sheets of green tissue paper.

And then I had LOTS of HELP applying Mod Podge ®  to the ping pong balls with layers of the tissue paper.  This was a very simple {and messy} process, but we were more excited about the process and what we were making to worry whether our technique was perfect. 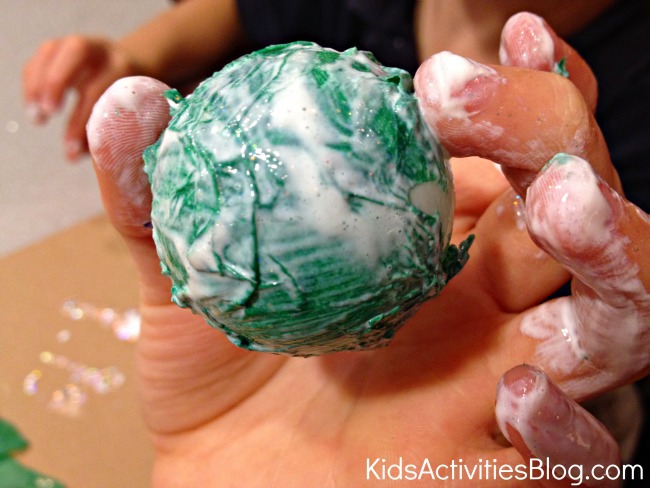 The truth was that my 6 year old was better at this than I was!  He had so much fun helping create 24 green balls and one red ball for our calendar.  We used Mod Podge ®  Sparkle which has sparkly glitter in the waterbase sealer, glue & finish.  I think it helped cover some of our “inconsistencies” and the balls turned out so pretty! 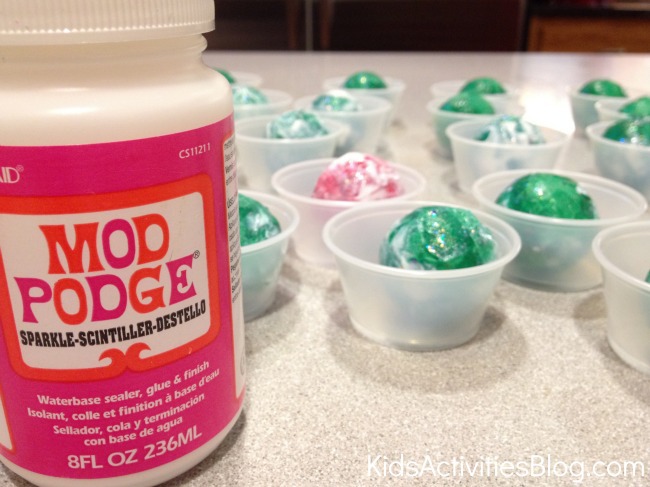 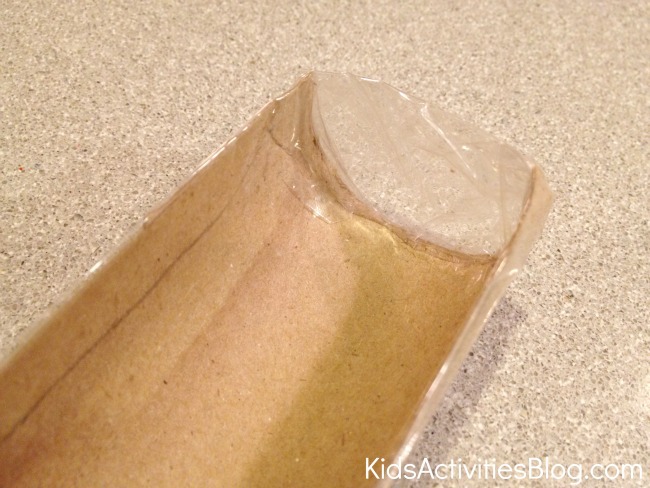 We then used the Sparkle Mod Podge ®  to layer tissue paper onto all our paper tubes and troughs with a festive polka-dot paper.

When the tubes and troughs were dry, I used a glue gun to affix magnets on one side of each.

These are all the pieces that we created for our Advent calendar: 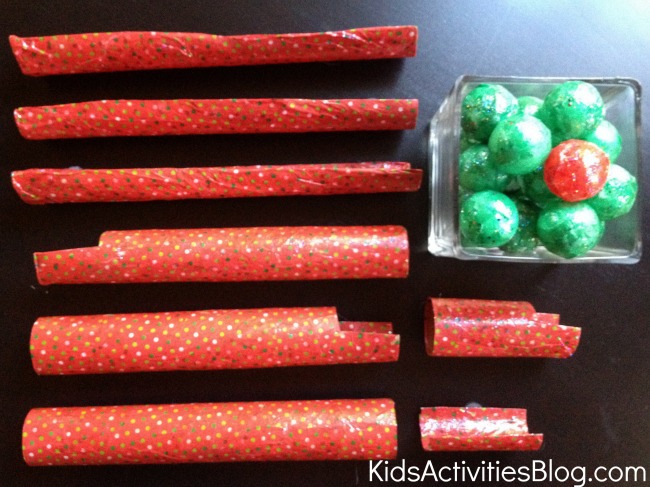 As you can see, I notched out the ends of all but one of the tube components to allow the ball easier access to the tube.  Now it was time to see if it worked! 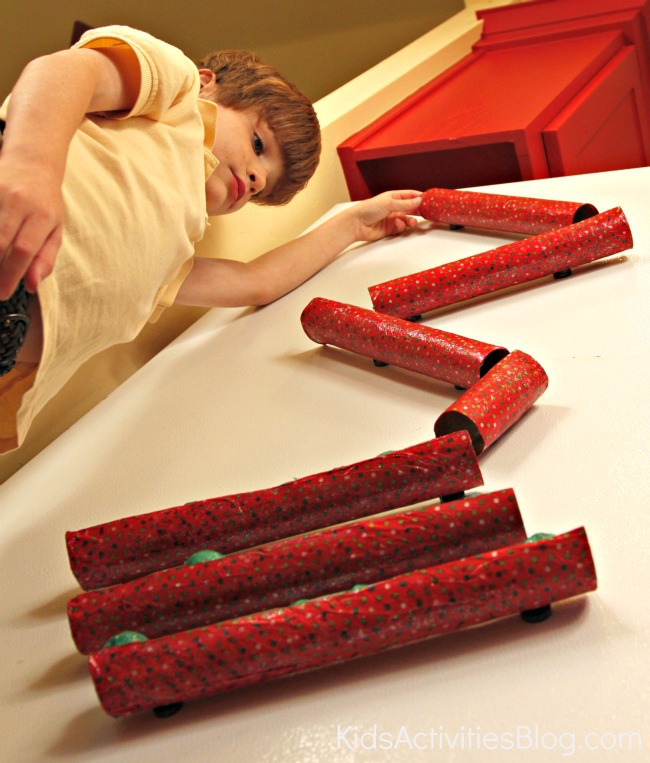 We set it up on the fridge with the un-notched tube at the top and then played with different ways to get the balls to go through the track without falling out.   This was all part of the fun.  We found that if properly aligned, we could get the three troughs at the bottom to fill and then spill down to the one below. 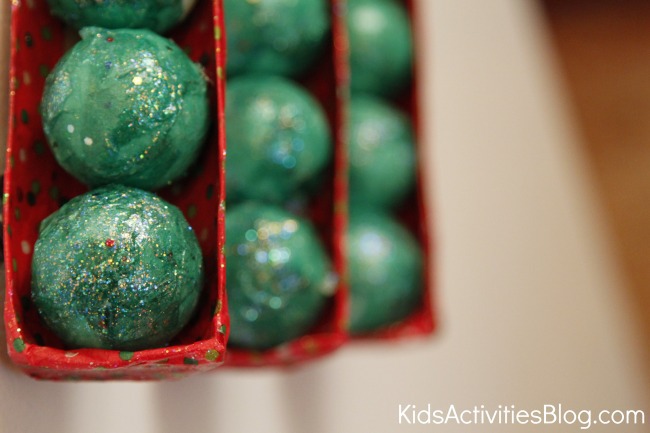 The goal was to have all 24 green balls fill into the troughs leaving only the red ball {for Christmas} fall to the floor. 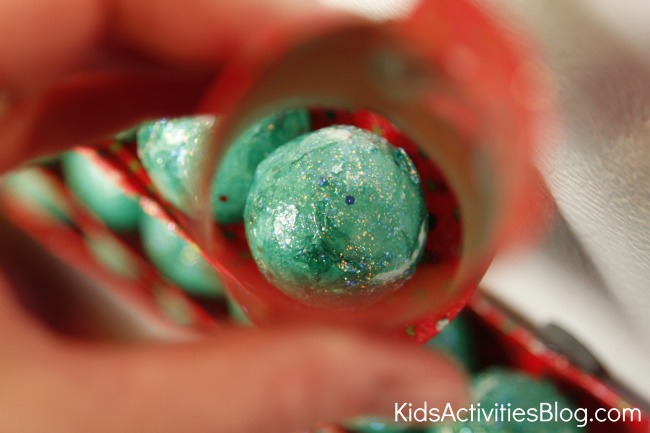 Obviously, there were ALOT of balls falling to the floor until we got just the right angles on each track.  My three boys love the finished product.  I can see it being something that becomes a family tradition at the beginning of each future December.
.
Thanks so much to Plaid ® Mod Podge ® for sponsoring this post {through Blueprint Social}.  We had so much fun completing our project.  Please understand that all opinions expressed here and technique shown are our own.

There are a ton of holiday Mod Podge ® crafts being completed this holiday season by other bloggers.  You can find out more information by liking Inspired by Plaid on FB, following @PlaidCrafts on Twitter, following the Twitter hashtag #MerryModPodge or checking out Plaid Crafts Pinterest page.

Here are some other projects: