Beach games were on my mind.   A while back, I caught a beach activity segment with Martha Stewart on the Today Show.   Although I liked many of her ideas and would like to try some of the others eventually, the one that I remembered and knew I could easily execute was her Beach Towel Tic Tac Toe game.   In Martha's version, she made a permanent game board using ribbon and Fabri-Tac as well as craft-quality shells and starfish for her X's and O's.   I knew that if we tried this, ours would be temporary and pale in comparison to hers, but it would be just as much fun.

We love nothing more than spending our summers at the Jersey shore (and no, it's not all Snooki-like).   On our recent vacation, I grabbed a roll of painter's tape on our way out of the house which is currently undergoing some construction (duct tape, masking tape, or electrical tape would work just as well “ you just don't want to use something that is going to blow away).   My father looked at me like I was nuts as I packed the tape with the sand toys.   I told him I had a plan and would need his help once we were settled in on the beach. 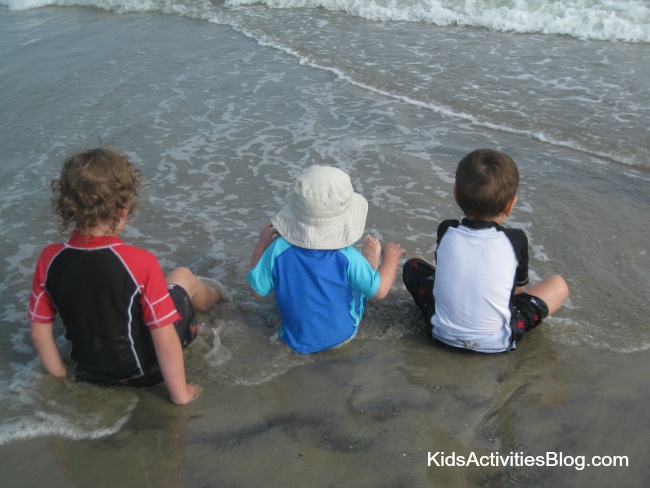 We unloaded all our gear and after the kids dug, swam, built sandcastles, had snacks, and started to get a bit ansty, it was time to reveal the plan.   I told everyone about the Tic Tac Toe game we were going to play and asked my father and sister to take the boys on a hunt for shells and rocks.   The one condition was that whatever they decided to collect, they needed to get at least six of that same object.   They returned with 6 grey oyster shells, 6 black rocks, 6 white rocks, and 6 rust colored rocks.   They found some other cool stuff along the way, but that's another story for another day.

In the meantime, I had set up the invitation to play.

I used the painter's tape to create a Tic Tac Toe board (which looks like a hash tag) right on our beach blanket. 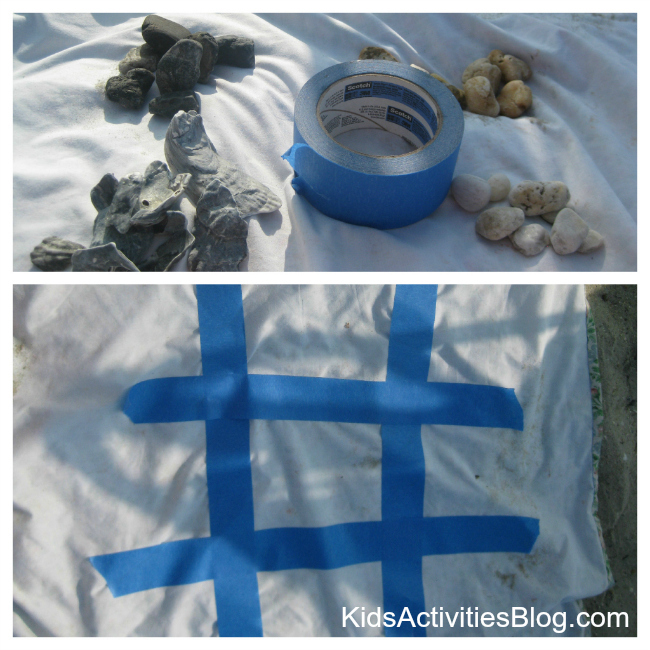 The boys set their collections next to the board while the concept of the game was explained to them.   They needed to take turns placing their shell or rock in each of the empty squares until someone got three in a row (vertical, horizontal, or diagonal).   The winner would get to play again against a new opponent.   Since we had four separate collections, the kids thought that each person should play with their own collections, so the game pieces changed with the opponent. 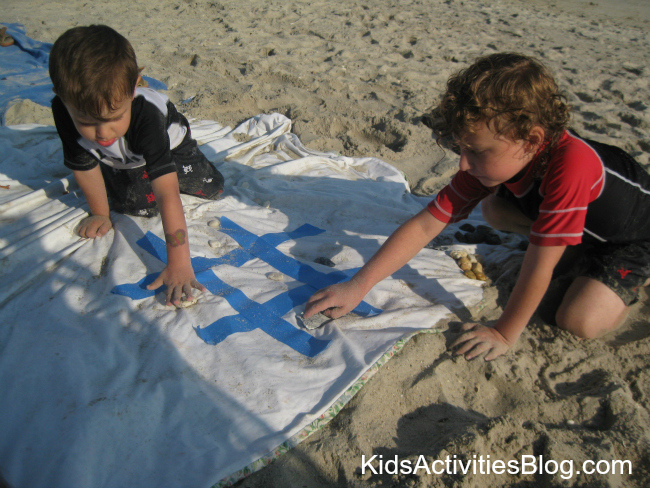 They quickly got the concept of the game and we played several rounds. 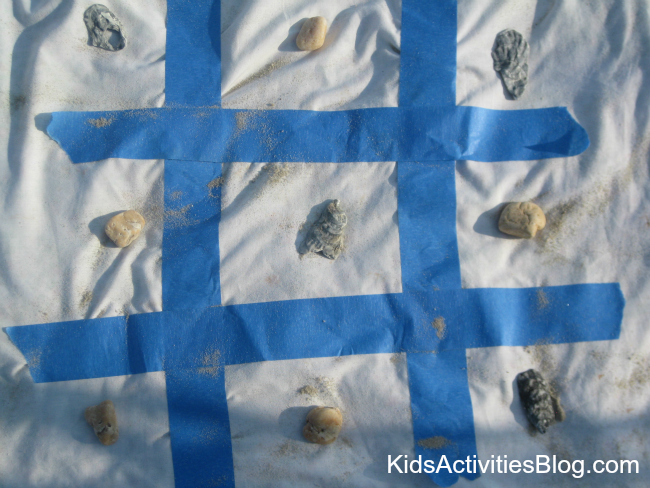 Then, the boys decided to start playing with the board in different ways.   They used their game pieces to make different patterns and designs.   They tossed the rocks from a designated spot to see if they could get it into one of the squares for different point values.   Then, they decided they wanted to go hunt for more collections.   They were focused and determined, but most important, they were having fun!

This game board is still on the underside of our beach blanket, and we have decided to keep it there until it needs replacing (or washing).   We are excited to use it again and again and discover new ways to play with it.   We plan on taking it with us on picnics as well and hunting for pine cones and such to use as our game pieces.

The boys asked me if I could create a chess board for them next.   That may be a little difficult to do with shells and a roll of tape, but I ™ll see what I can do!

What's your kids ™ favorite activity at the beach?

Can’t make it to the beach?   Here are a few ways to enjoy the beach at home: