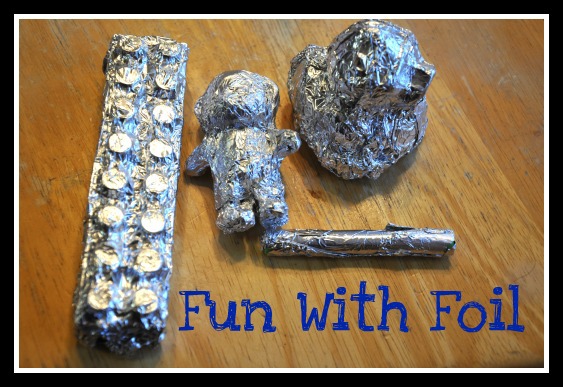 We had been using aluminum foil for a school project.   Once we were done, my kids started playing with their leftover foil scraps.

It really is fun to play with foil!

Then they started asking for more.   And more.

Aluminum foil is inexpensive and so much fun to create with that I let them use all they wanted.

**I did have a rule that I had to tear it off the roll for them because I didn’t want them accidentally hurting a finger from the cutter on the side of the box.

I love letting them create freely without any direction or instructions.   It’s the best way to let their imaginations run wild.

My son came up with some really great creations.

He made lots of things but my favorite was this little foil box.   I didn’t understand it when he first showed it to me.   Then he pulled back the foil to open the box and I saw the box held a little foil ring.   The box really was crimped to hold the ring upright just like it should!   He took the ring out and said that he thought I needed some new jewelry.   Aww!

Then he and Rachel proceeded to make fun shapes, plants, and animals.   Below you see a sting ray, a Hershey’s kiss, and a swordfish.

Since he apparently has an ocean theme going, he took it a step further and built a cool Viking ship out of the foil.

If a boy has a ship, then he’s going to ask for some water so he can float it.

Then he also made a wider boat that was an aircraft carrier for his two jets. 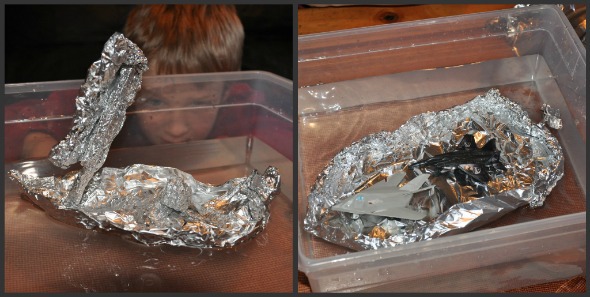 Later, Nicholas pulled out his Star Wars action figures and wrapped Hans Solo in aluminum foil.   He announced that it was Hans Solo sealed in Carbonite when he was delivered to Jabba the Hutt in The Empire Strikes Back.   Yes, we are sci-fi geeks and I loved this!

Then they decided to wrap other toys in foil…just because.

While they were goofing around with the foil, I picked up a few of my 3 year old’s toys and completely wrapped them in foil.   I put them in front of her and asked her to guess what they were.   I was surprised that she only got one out of four right but oh my!   What fun she had guessing and then unwrapping them to reveal the answer!!

My kids could literally spend HOURS playing with aluminum foil.   I’d love to hear about fun ways your kids have had fun with foil?