Reid (5 almost 6) is the middle child and has always been the forgotten one. From birth he has been my easiest, my most accommodating, my quietly independent child. 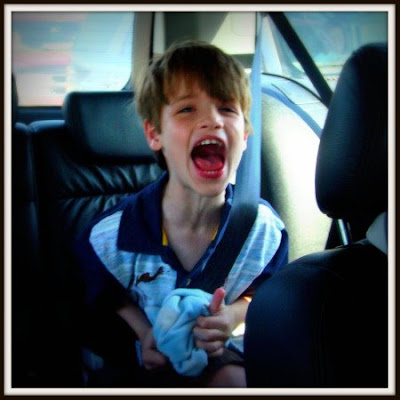 He is flanked on either side by brothers with spirits as large as hurricanes. He huddles in the middle to weather their storms.

About 6 months ago he started throwing tantrums* every time we left the house.

*Let me clarify that a Reid tantrum registers around 1 on the tantrum-Richter-scale. I try not to judge, but really, after seeing his brothers’ tantrums I would think by just using pure genetics he could put a little more effort into the show.

One day blog-Stedman watched the pre-karate fireworks as I wrangled Reid into his ghee.

We had a chat before I left to take the boys to class about whether it was karate or life that was bothering Reid. We decided it needed further investigation and possibly a change in schedule.

We got to karate and Reid completed his class without incident and with his full participation – as usual.

Me: Reid, you did very well in karate today.
Reid: Yes.
Why the big fuss before we came?
I don’t know.
Do you like to do karate?
Maybe.
Would you rather do something else?
Swimming.
OK, we can do that. It will take about a month to make the switch.
I like to swim.
I will talk to the karate class and cancel your lessons here.
Yes.
*we sat quietly for a few minutes while I thought about the details of the change and then thought I might want to ask one more question*
Reid, if I switch you to swimming you may NOT throw a fit before class – do you understand?
*pause while Reid thought about it* Mom, I think I better stay in karate.