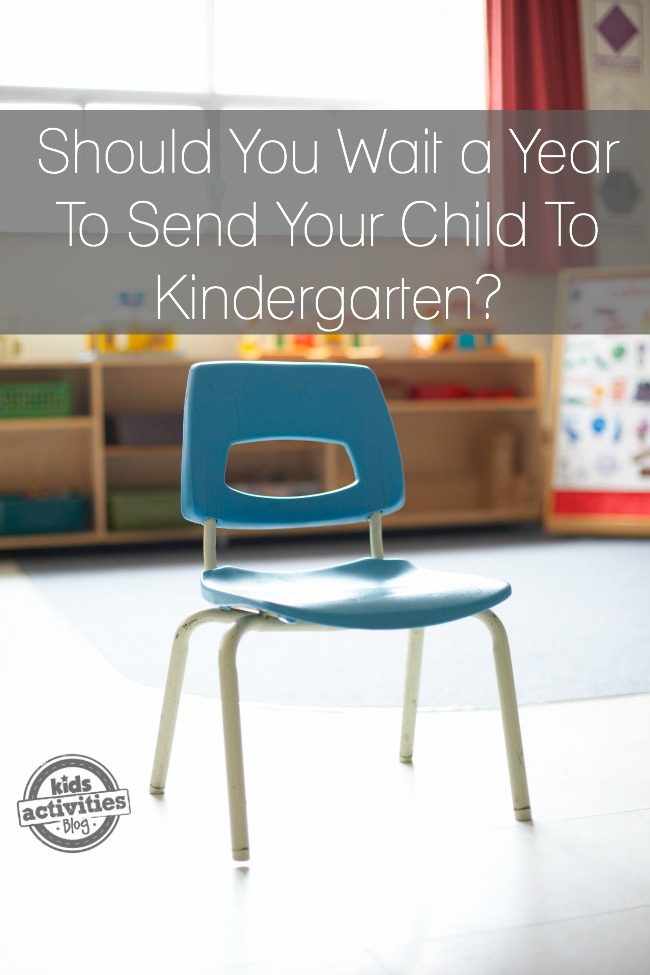 Should you wait to send your child to kindergarten?

Like many well-educated couples, Steven and Laurie Van Ooven knew that their kids ™ late July birthday would likely make them some of the youngest children in their class–and perhaps put them at a disadvantage academically and socially when competing with chronologically older peers.

So by the time their twins were five, the decision was almost a no-brainer: Following an additional readiness assessment, the siblings would do an encore  year of preschool before moving on to kindergarten. This would give the siblings time to mature before taking on the rigors of an elementary-school curriculum.

I think we almost decided at birth,  Mr. Van Ooven said. They were summer babies. And since we had a boy coming, well, it was something that was pretty straightforward. 

Sam and Anna have plenty of company.

Six percent of all children eligible for kindergarten under state statutes in the Lewisville Independent School District are held back by their parents–a practice nicknamed academic redshirting  by educators. 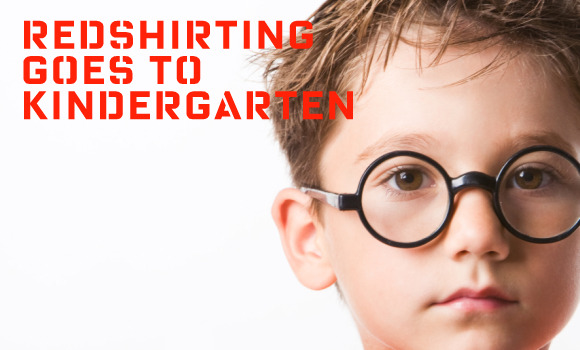 While that number is comparable to those in other communities nationwide, it is noteworthy that more than half of all children redshirted in that district  live in the affluent communities, said Kathy Haule, the district's Early Childhood Supervisor.

This means that on average, every kindergarten in these communities has at least one or two children who might be upwards of six and a half years old–a whole 18 months older than his or her classmates.

National experts are at odds over whether or not such practices help or hinder individuals.

The research is mixed,  said Donald Easton-Brooks, an assistant professor of Teacher Education and Administration at the University of North Texas in Denton who has studied redshirting. If you're an impoverished community where parents can't provide meals, then schooling ¦would be beneficial. If you're a child in an affluent community, I don't know how delaying a child would be a benefit. 

Moreover, Easton-Brooks worried about the societal impact on ethnic minorities, who are far less likely to be redshirted than their white peers and thus are competing with significantly older children. “Pitting such children against one another is simply unfair,” he said.

He also said one thing is clear: The trend will continue–and escalate. Especially in communities where parents have the money to make choices.

Is Your Child Ready For Kindergarten?

While the district does not currently keep track of redshirting trends, it seems as though more families become more concerned about kindergarten readiness when the district moved from half-day to full-day kindergarten in the 1990s, said Dean Tackett, a public information officer for LISD who served as an elementary school principal for 17 years.

Parents began worrying about the demands and the endurance needed,  Mr. Tackett said. When you're in the suburbs, parents want kids to be stronger, faster, brighter. 

Despite interest in the topic, the district's policy is in line with state laws and thus administrators encourage those with children who turn five years old by September 1 to enroll them in kindergarten, Ms. Haule said.

Our official position is that any child legally of the age has a right to be education,  she said.

Still, many practitioners throughout the district including Ms. Haule encourage families to assess their children themselves for signs of readiness, consult with preschool teachers, day care providers and pediatricians before making any decisions.

Brandi Valor of Flower Mound talked to her daughter's preschool teacher then opted to redshirt Isabelle, who was born August 13, based on the belief that she needed time to master academic fundamentals.

Our daughter has always excelled socially, with her vocabulary, her conversation skills and the like,  Ms. Valor said. We felt the extra time to master her letters and numbers would be time well spent. We want school to be a fun, exciting experience for our kids, not something they have to struggle with. 

Marion Greer of Lewisville was sure her sweet, sensitive son  was ready academically for kindergarten even though he had a late August birthday, yet she was concerned he didn't quite have the social skills necessary. Thus, she held him back.

It was the best decision we ™ve ever made–he bloomed in that extra year,  the former kindergarten teacher said. I truly believe allowing students to have maturity when starting school is the greatest gift we can give. 

She added that the benefits have been long-lasting: Not only did he have a positive kindergarten experience, but he also excelled in first and second grades and is performing well now as a third grader.

While parents like Ms. Greer often make such observations, early childhood education advocates aren't so sure children who are redshirted gain anything from it.

There is no research to support the idea that holding a child back helps them in school–even if the kid is young,  said Jerlean E. Daniel, the deputy executive director at the Washington-based National Association for the Education of Young Children.

Ms. Haule, of LISD, countered that even if there is an advantage early on, the bottom line is that any gain the child seems to have socially or emotionally going in seems to diminish by middle or high school. 

She added that research shows that academic gains ¦begin to even out by third grade. 

Furthermore, Ms. Daniel contends that some of the very children who parents aim to help are actually hurt by redshirting.

Families have to ask themselves, is my six-year-old going to be bored (academically) or really far ahead in terms of life experience?  she said. “If so, hanging out with five-year-olds is going to be a drag,” Ms. Daniel added.

The best thing to do, then, is to assess the individual child and remember that kindergartens include a diverse group of students, said BeLinda Nickel, who has served as principal of Heritage Elementary School in Highland Village for 11 years. Some kids come very, very prepared and others don't know letters or have number recognition. 

This is expected, she said, and addressed by kindergarten teachers who aim to help all children gain the knowledge an skills needed to move on to first grade.
Moreover, a child who has a strength in one area will likely have a weakness in another, added Robin Macke, the principal of Wellington Elementary School in Flower Mound. Thus, a student who has mastered the alphabet can work on learning to sit quietly during story time, she said.

Remember, too, that age won't change a child's personality, she said. Those who are shy might always be shy–and they ™ll gravitate towards others who are quiet, too.

If you can rule out possible learning issues ¦and everything else is intact, bring ˜em to me,  Ms. Macke said.

As a mother of six children, she admits this is easier said than done.

Julie Blair is a freelance journalist based in the Dallas area. She has written about local, state and national education issues for more than 10 years. Ms. Blair is also the author of the book Building Bridges With the Press: A Guide for Educators. 