It was a call of epic importance. 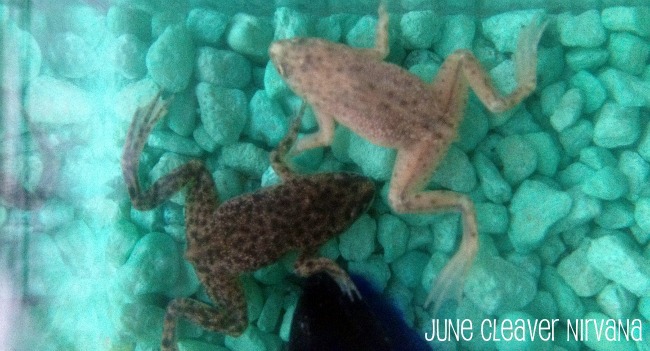 I tried to take it without alerting Reid that I held the knowledge that happiness was just a trip to the toy store away.

Was it the frogs?

Yes.   That was the frogs.   We can go pick them up tomorrow.

And so we did.   Reid had to choose just one pair of frogs to take home out of 30.

That is a big decision.

He had to decide whether he wanted the additional plastic stand for $3.99.

He had to learn how to feed the frogs twice a week.

We left the store after intense deliberation with two frogs in a square habitat with a year’s worth of food and a plastic black stand.   Reid was happily $34.99 poorer.

What are you going to name them?

Ryan(10):   I think you should name one of them after me, your most loyal brother.

Maybe I will name them Frog & Ryan.

That was the general consensus.   It would be WAY too confusing to have both a brother and a frog with the same name.

I mean, if you called out Ryan, how would we know who you meant?