I have noticed that every once in awhile I have “yelled” something unusual at my kids. 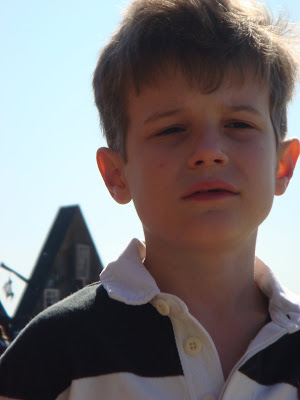 And by “yelling” I mean a hasty order with a slightly raised voice out of pure exasperation.

I first documented this phenomenon almost two years ago with the following phrase.

Yep, that is pretty unexpected, but I think I have topped that with this:

I might even dare to say that no one in the history of the world (outside of maybe an ACME cartoon character) has ever said those words.

Why does Holly own an anvil?

I don’t own an anvil. It is Ryan’s anvil.

Why does Holly’s oldest son own an anvil at the ripe age of 7?

He got it for Christmas a few Christmases ago.

Yep, when Ryan was 5 he got an anvil for Christmas. He opened the gift and said, “Oh good! Just what I wanted!”

It was true. The anvil topped Ryan’s Christmas list that year. He was really into breaking rocks into smaller pieces with a hammer. He was sure that if he broke enough stones he would find a diamond.

When you use a hammer on stones, it is best to have an anvil. His anvil arrived from grandparents who also included protective eye wear. Overall it was his favorite gift.

So back to the anvil flying through the air…

Me: Who threw the anvil?

Ryan: Uhhhh…it was an ACCIDENT!

No one accidentally throws an anvil.

I was holding it above my head and my arms got tired.

Alright. I think there is a new house rule that anvils stay on the ground.