I love shopping the clearance section when major holidays pass “ you never know what you're going to find or when you might use it, but it's nice to stock up on random inexpensive things.   For example, when all of the Easter items were 75% off, I grabbed a bag of plastic eggs, but had no idea what I would do with them.   So, I put them in our play room closet and forgot about them.

Last week, we had so much fun learning about our sense of touch with our Discovery Bags that we decided to explore another sense this week: sound!   One of the instruments my students use in the Kindermusik classes I teach is a shaky egg.   Babies and toddlers alike enjoy hearing the sound these make when shaken.   After one of my recent classes, I came home and took out the bag of plastic Easter eggs and wondered what they would sound like with different materials placed inside.

I took out six blue eggs.   I wanted them all to be the same color so that sound was the only thing that differentiated one from the other.   I then raided my pantry and took out pasta (tubetini to be exact), popcorn kernels (which we seem to use a lot (like in our Sink or Float Experiment)), and M&Ms (my private stash). 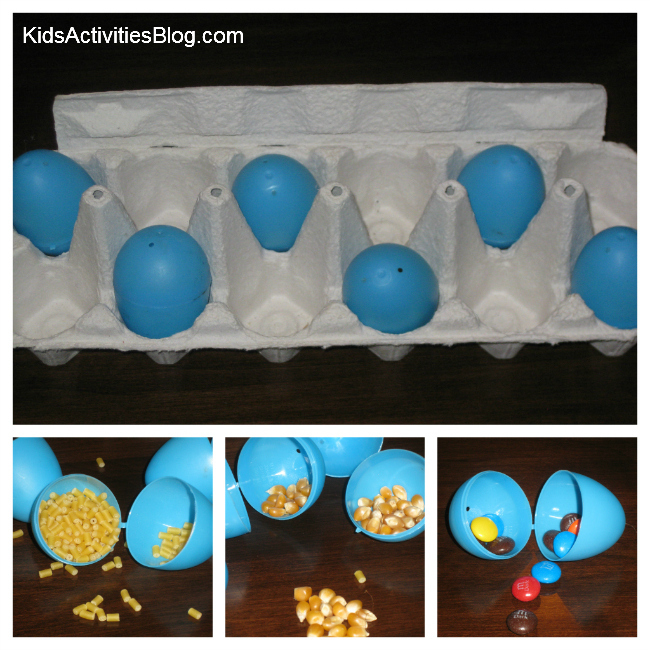 After a failed attempt to get them to sound the same without using an exact measurement, I tried again using my measuring spoons.   Although you can use any material (paper clips, other small pasta, coins, beans, etc.) and any amount that would fit inside, make sure that the eggs are as close to identical as possible.

Here's what I used for each pair:

My husband was sitting in the living room as I was preparing this in the kitchen, and I asked him to act as my tester.   I shook each egg and asked him to identify if the eggs were the same or different.   I did it several times to make sure that it was clear and the sounds were distinct.   I am happy to report that he passed with flying colors!

The next day, I presented a carton of blue shaky eggs to my son.   I explained how the matching game works: each of these eggs had something inside and the object of the game was to find the matches.   Since he has played matching games like Memory before, he knew that he was supposed to return the eggs to their spot after each turn.

When my son picked up the first two eggs and shook them, he thought they sounded alike.   This was in part to him shaking them both simultaneously.   Once he concentrated and shook each one individually, he realized that they were different and placed them back in the carton.   He repeated this several times, talking about the differences along the way.   Although he still didn't know what was inside, he was able to explain that the ones containing the M&Ms had the deepest sound, the popcorn was in the middle, and the pasta had the highest pitch.

He was able to make the matches relatively quickly and was so proud of himself.   He really did a great job and showed amazing focus and concentration!

My son then asked me if he could look inside each of the eggs.   So, we opened them up and poured the contents of each egg onto our table.   Somehow, the contents of the M&M eggs mysteriously disappeared. 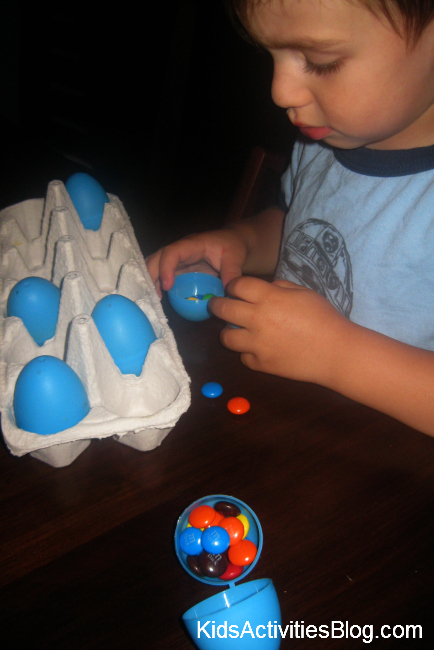 This is an activity that can be played repeatedly with different materials inside as well as different amounts of the materials.   It can also be made more or less challenging by adding or remove pairs.   The only thing to remember is to be precise when filling the eggs so that the sounds are nearly identical.

Then, when you're done with the matching game, why not put on some music and have a shaky egg dance party* (Laurie Berkner has a great song for this called I Know a Chicken  “ check it out!)!

What will you put inside your shaky eggs?

*Note: You might consider putting some Scotch tape around the seams before you “let the wild rumpus begin,” as they tend to come apart easily.

Would you like to learn more about sound?   You might want to look at these ideas from Ness and the way she taught her son how sound is made.