Spend the day in one of Texas’ most popular tourist destinations, the Fort Worth Stockyards. The Stockyards is an area rich in Fort Worth history. Back in  1876, the railroad first came to Fort Worth and the city boomed as a major shipping point for cattle, hence it’s nickname “Cowtown”.

World War II was the best time for the Stockyards. They peaked their operation during this time and processed 5,277,496 head of livestock in one year. But soon after the war, the popularity of the railroad declined as trucking became a more efficient way to get product to market. Over the years, the Stockyards struggled until it became unprofitable. Although there are still weekly livestock auctions here, most of the area is now geared towards tourists including the twice daily cattle drive down Exchange Street. But even with all the tourist activities, you can’t walk through the Stockyards without feeling the heritage and history that made it so great in its day.

And what better way to experience this heritage first hand than to attend Cow Camp hosted by the Fort Worth Herd? 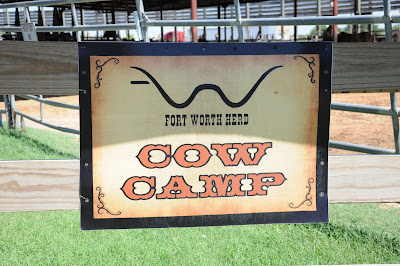 Camp started with sitting around the “fire” listening to a cattle drover’s stories about about cattle drives, life on the range, and the chuckwagon. 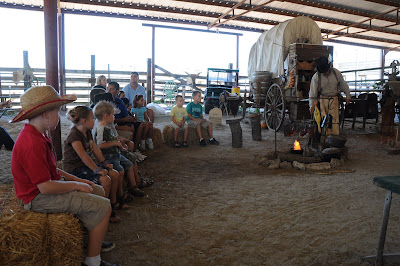 We learned about the progression of lassos. Back in the pioneer days, lassos were typically made from rawhide, either buffalo or horse. But these lassos were heavy, cumbersome and often developed weak spots which made them easy to break and then rendered useless. The leather lasso has almost been completely replaced by hemp grass lassos which are lighter and stronger than lassos of old. 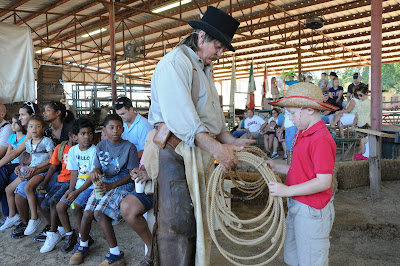 Of course, we got to watch a ranch hand do some fancy roping tricks for us. 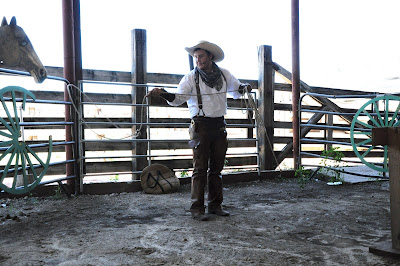 Next we listened to another cowboy who taught us about branding and the story behind the Fort Worth brand symbol (see the Cow Camp sign at the top of this post). It’s an FW that stands for Fort Worth. The “F” looks backwards to represent Fort Worth’s history and the “W” is a wave looking forward at the future. Fort Worth is the only city with its own brand and it’s the only city that uses the same brand for both cattle and horses.

We learned about training horses and watched some neat horse tricks. The cowboy explained the purpose of all the gear that cowboys carry. He taught us about the bull whip and did some amazing whip cracks.

We looked at the Stockyards version of the I Spy game. There’s a board with the pictures and names of the longhorn and you have to find them all in the pen. Some are easy but others look very similar. Which way do his horns turn? Does that one have a spot on his forehead? Are his horns tipped or not? It was a fun little game. 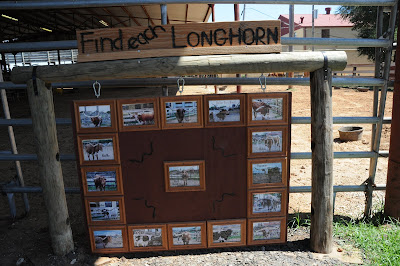 A real cowboy must have a real cowboy hat, right? So we headed down Exchange Street to Fincher’s to try on some hats. Nicholas found the perfect hat right away. A boy and his first authentic cowboy hat… 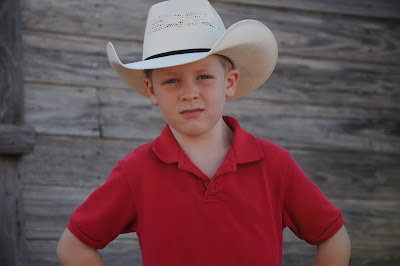 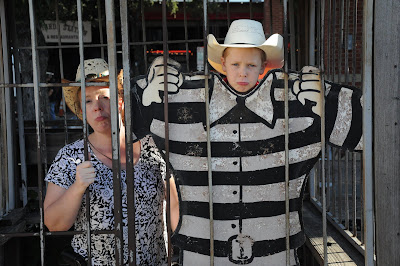 We had a great lunch at H3 Ranch at The Stockyards Hotel on Exchange Street. This restaurant has a warm, rustic atmosphere which helps you feel right at home in the Old West. It took a little while to get our order out  but the food was worth the wait. I recommend the Hickory Cheeseburger. Doesn’t that look good? 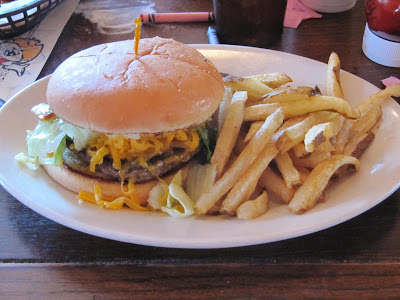 Although it has nothing to do with the old West, we always seem to end up at The Candy Barrel when we come to the Stockyards.   It’s just hard to resist such a fun store full of barrels of candy and taffy. We especially like it here because you can find candy here that you just don’t see any where else like lollipops with real scorpions in them, giant pez dispensers, a yard stick of bubble gum, and even candy cigarettes (I can’t believe they still make those?!). This is a picture of just the back of the store where all the different flavors of taffy are located. Did I forget to mention that they even offer free samples of taffy? Yum! 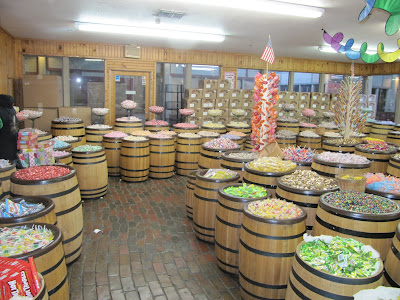 We’ve been to the Fort Worth Stockyards many times before but each time we go we find something new. There are just so many things to do here. There is the Cattlepen Maze, the Stockyards Museum, Billy Bob’s Texas, Texas Cowboy Hall of Fame, Stockyard Station, Old Time Photo Parlor, and Pawnee Bill’s Wild West Show.   And of course, you don’t want to miss the twice daily cattle drive down Exchange Street at 11:30 am and 4:00 pm.