Surely you know about the current craze with kids – Silly Bandz. They are little colored rubber bands that are shaped in all sorts of different designs from stars and hearts to wolves and vampire fangs. They look just like a colorful rubber band that’s been formed into a shape when they are lying on the desk but kids wear them as bracelets, sometimes 20, 30, 40, or more at a time. And they trade these things with other kids. “I’ll give you my guitar for a dragon?” I had heard about these crazy things a while back but not from Nicholas nor any of his friends. I really thought we were going to dodge that bullet altogether.

But then Nicholas noticed someone at school had a bunch of them on his wrist and he started hearing more about Silly Bandz.

He was given his first Silly Bandz at a party at school. He was given a band that was shaped like a cowboy on a bucking horse. He traded it for a longhorn. He was hooked.

He has been given other silly bandz by friends but I’ve also bought some for him to get as rewards for doing something above and beyond. They are definitely a good motivator for my child. Who knew? Colorful shaped rubber bands?! I would have never guessed it. 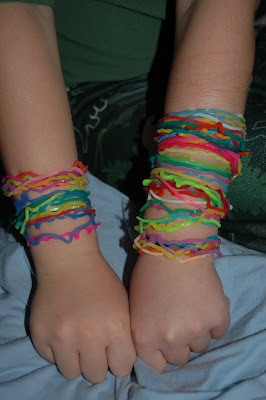 The Silly Bandz craze is so big that stores host Silly Bandz trading parties. I took Nicholas to one of these at our local Borders bookstore recently although Learning Express hosts them as well. It was a small turnout – 2 boys and 2 girls. I was amazed at how many bands some of these kids had! And how obsessive they were with remembering from whom and where they got certain ones and how they know which ones were “special” or “rare” and they would only trade one special bad for 2 regular ones because it is so “valuable”. It was entertaining to hear them talk amongst each other. 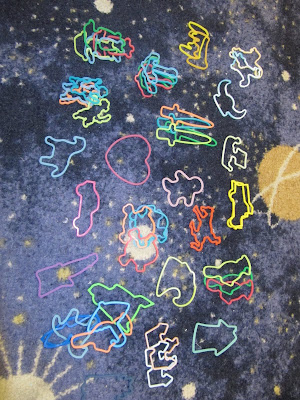 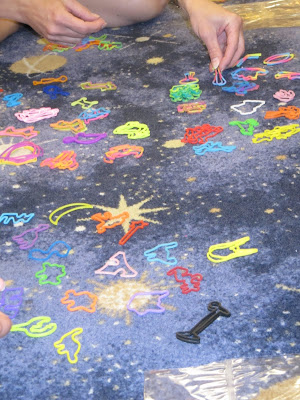 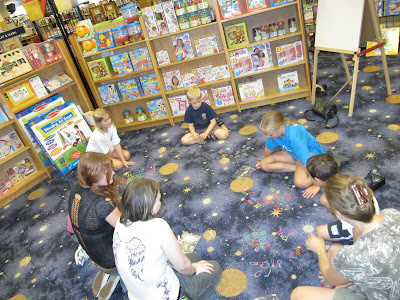 Borders even had refreshments for the traders who were working up an appetite with all the high pressure trading going on! 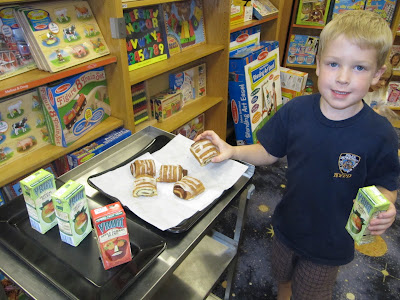 While the fad is quite silly to me, I can see that Nicholas has already learned a lot through Silly Bandz trading. He told us one time that he had to trade 10 Silly Bandz just so he could get one tie-dye colored phoenix. We were able to use this to talk about negotiating and bargaining. He must have taken our words to heart because he is a much more effective at trading now.

What’s really funny is that now Rachel is also addicted to Silly Bandz.

She will grab up any loose Silly Banz and quickly put it on her little wrist. She will squeal if you try to take it off. And I make her take them off at bedtime when she isn’t supervised because I worry she will put it in her mouth and then fall asleep and choke. On occasion, she has also double wrapped a band around her wrist so that it is too tight. It hurts her but it’s so tight that she can’t get it off by herself. Toddlers and rubber bands of any kind just don’t mix.

Today I picked Rachel up from child care at the gym. Silly Bandz in the toddler area where she plays for the very reasons I mentioned above. And although she didn’t bring any Silly Bandz with her, she came out saying, “I traded Silly Bandz! I got a dragon!” Too funny. There were no Silly Bandz in sight but she has heard big brother say this kind of thing when I pick him up (and she copies everything that big brother says and does). 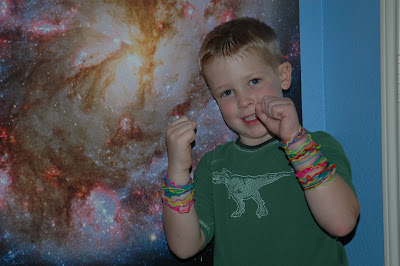