Probably my favorite visit during our spring break roadtrip believe it or not was not the Alamo. Sure, the Alamo was a definite highlight, but one place I’ve been dying to visit is Luckenbach, Texas.

I probably first heard about Luckenbach when I was a preteen living in San Saba out in the Hill Country of Texas. My stepfather loved listening to old rock, country, and music from the 70s and 80s, which probably explains my affection for the same genres of music. I remember taking his Alabama cassette tape and using a song from it to lip sync to for a talent show for school, but it was the song my stepdad used to play by Waylon Jennings and Willie Nelson, Let’s Go to Luckenbach Texas, that burned an impression in my mind. Not that I had any idea who who Waylon Jennings was (but I had a huge crush on Willie Nelson!), I just liked the words and feel of the song.

Not that I knew what firm feelin’ women were either, much less Newberry’s train songs and the Hatfields and McCoys.

But the basics of love, the need to be laid back, and the desire to feel no pain–that was something I could certainly identify with.

I can’t tell you how many times I have passed or driven very close to Luckenbach and never stopped. However, this time I wasn’t letting anything or anyone stop me from seeing what this place is all about.

But first, where is Luckenbach and who is this Hondo dude?

Another good question: I’ve always heard of the Hatfields and McCoys…now just who are they anyway? 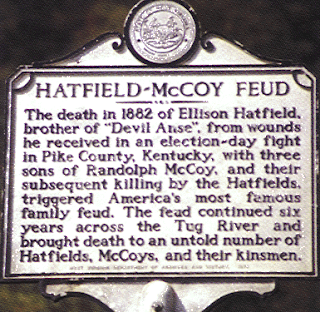 Dang, and I thought my family was bad. Then again, my family ain’t involved in politicin’ either.

I enjoyed walking around and visiting Luckenbach, although next time I’d like to spend more time there than just the fifteen minutes or so that we did walking around and taking photographs. It would have also helped if I hadn’t needed to find a restroom badly too. Now don’t get me wrong, they had restrooms…

No not this–that’s an ATM:

…although I wasn’t about to use them because I saw a grown man walk out of the women’s restroom and I admittedly got intimidated by that.

He was probably just drunk or lost. But still.

I loved all the graffiti on the walls and almost signed my own name, but after this incident at the Cadillac Ranch last summer I decided against it.

Did I feel any different in Luckenbach? Did it change me? No, but I don’t think that’s the purpose of this place. Instead, I found a piece of me I identified with here. I rediscovered what I love best–simplicity and longnecks.

Okay. Fine. I’m Mormon so the longneck part is out. Although I am sure someone else can identify with that.

Here’s where you can get your longneck in case that person is you:

And yes, I can’t wait to go back to Luckenbach, Texas. Just not sure I’ll be doing the basics of love there. Gotta figure out how to be a firm feelin’ woman first. Or not.