Home » Kids Activities » Activities for Babies » Things to do with a Toddler: Clothespin Play
0shares

Are you looking for things to do with a toddler?   I was wandering through the dollar store the other day looking for more items to play with and explore at home. I came across a bag of clothespins. I put them in my cart, and waited for my inspiration. 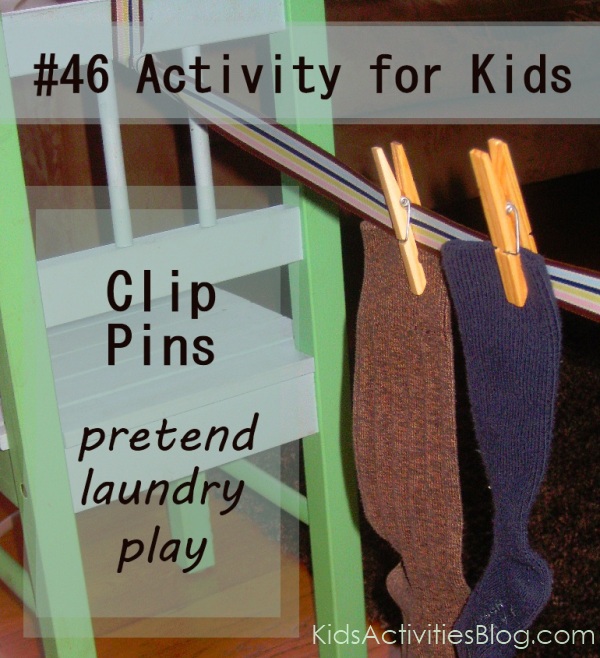 One of my fondest memories from my childhood is breakfast at my grandmother's house every Saturday morning “ and the most fun we had was sneaking clothespins from her clothesline and secretly clipping each other.   Well, I just couldn't resist trying that with my son.   When we got home, I let him explore the clothespins any which way he wanted “ he clipped them together to make a train, he dissected them (and had me reassemble them), he stood them up and knocked them down.   Then, throughout the afternoon, I would cuddle up close to him to give him a hug or kiss, and clip a clothespin onto the bottom of his shirt or his sleeve or a pant leg.   Occasionally, he would catch me in the act, but most times, I was successful and it would be a while until he discovered that he had been clipped!   He was hysterically laughing.   My favorite part, however, was when he decided it was time to get me back.   He would try so hard to be subtle, but that's rarely possible with a toddler.   I just had to pretend I didn't notice the giggling and the tugging behind me as I prepared our lunches.   Then, upon sitting down to eat, I was so surprised by the pins on my shirt and I praised him for his stealth!

I then decided upon the official  clothespin activity.   I had a basket of clean, folded laundry sitting nearby and, much to my son's delight, I told him to dig through it and pull out every sock he found “ Mama's, Papa's, his, and his sister's.   Although, I would have to eventually refold everything (sigh), having the permission to tear through the laundry basket like a maniac would have sufficed as the afternoon's activity because it was so much fun!

While my son was otherwise occupied, I set up the rest of the scene.   I took his playroom chairs and a long ribbon (but any sturdy string or rope will do).   I tied the ribbon on to the chairs and spread them apart so the string was straight. 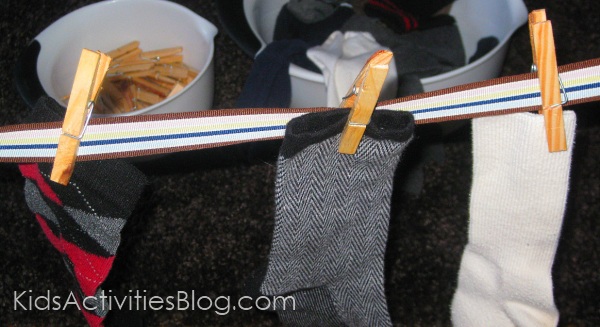 I put the clothespins in one bowl and had my son put the different colored, sized, and textured socks in another.   I invited him to clip the socks onto the clothesline.   Occasionally, I needed to help hold the ribbon or the sock as he clipped it on, as his little fingers were still getting used to opening and closing the clothespin.

To extend this activity further, we decided to move the socks around to match them up with their mate.   We also rearranged them in size order and grouped them by color (mainly lights and darks).   We were even able to work on some math skills with this activity “ we counted up as he put socks on the line and counted backwards as he took them off.   We even did some addition and subtraction.

We got a lot of play out of a dollar bag of clothespins.   We did math, we worked on fine motor skills, and we were very creative in our exploration.   And when my husband came home from work, rest assured that he got clipped many, many times!

Have leftover clothespins?   Maybe you can make clothespin treat bags with them.