As part of our American History lesson a few weeks ago, we visited the Texas Civil War Museum.   One of the things that impressed my kids more than anything was that there were hardtack {and sea biscuits} in the display cases FROM THE CIVIL WAR.

Yes, this food was so non-perishable that it has lasted all these years.   We purchased a hardtack biscuit that was made more recently from the museum gift shop.   It was made by the same company that made the hardtack for the civil war.   On the back was a recipe for hardtack, so of course that is what we did in the afternoon! 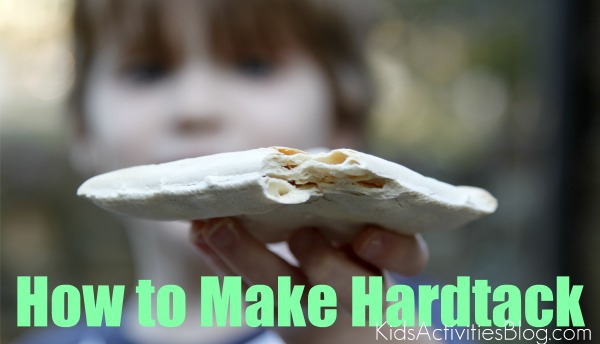 How to Make Hardtack

Ryan mixed the flour and salt together and then added the water a little at a time until it was the consistency that could be mixed by hand.

He then rolled it out with a rolling pin onto a floured surface.

Once it was 1/2 inch thick, he cut it into 3 inch x 3 inch squares using a ruler and pizza wheel.

The dough squares were arranged on a cookie sheet and placed into a pre-heated oven at 350 degrees.

We baked them for 30 minutes and then turned them over and baked for another 30 minutes {or so}.

They look so fluffy while they are baking and warm.

They will dry and harden as they cool.

This recipe makes a LOT of hardtack.   We had plenty at home and sent some smaller 2 x 2 inch square pieces to school with Ryan to feed his 5th grade class.

Hardtack was issued to the civil war soldiers {on both sides} along with salted pork as food rations.   Hardtack was often soaked in water, fried in pork fat and then salted to taste by the soldiers.   Use of a flour and water biscuit in history dates back to the Third Crusade in 1189.

Hardtack was the original travel food.   It could be made ahead and carried on a journey.   Join the camping conversation over at KOA Campfire!