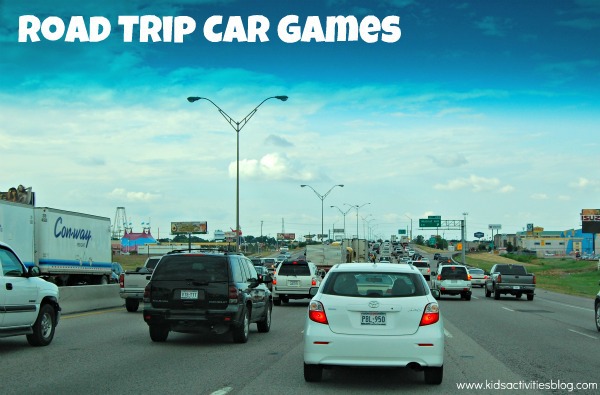 Summer just isn’t the same without the  quintessential road trip.  Whether we are heading down the road 3 quick hours to Grandma’s house or driving 15 hours to the beach, we always over plan to keep our kiddos busy in the car.  I pack special toys, new books, different snacks, and yes, a new movie or two.  I want to avoid them being “plugged into” their electronic devices the whole trip, yet I don’t want to hear, “are we there yet mom??”

I have in my arsenal a few games and methods of engagement that I pull out on each trip.  It gets us in conversation, encourages them to look out the windows at the beautiful country we are passing by, and are a fun way to pass the time.  These are all “tried & true” games that we have enjoyed as a family:

All-State Roundup:  To play this game, you will need one laminated map of the United States and one marker per player.  Players look for license plates from the fifty states and record the state name by marking off that state on their map.  For a variation, you can also note each license plate on a piece of paper (but the map adds the additional challenge of learning where it is!).  The player with the most states marked off by the end of the day or trip wins.

A,B,C I Spy:  For young kids, searching for letters of the alphabet is very compelling.  Have them call out, in order, each time they find a letter in a road sign or on a passing license plate.  You end up looking for an  A, then a  B, continuing through  Z.  You  must  find them in order.

On Sale:  One player owns a store of his choosing and all the players have to guess what it is her is selling there.  Whoever guess the correct answer gets to open his own store.  For example, one child starts by saying, “I own a camping store and I sell something that starts with the letter T.”  Each of the players get 3 chances to guess what he is selling.  If a player guesses correctly (tents, for example and he is right, he gets to open his store next.  If the item is not guessed correctly, the owner of the store gets to sell something else.

Pass By:  Keep a pad of paper & a pen handy.  As you pass by other cars, billboards, signs, stores, or other sights, have each child call out something funny she sees and you keep the list.  Personalized license plates, funny sayings around the rim of license plates or on bumper stickers, signs in restaurant windows all count.  You’ll get a kick out of reading these at the end of each day.  When you return home, the long list will help you remember those fun times when you collected the names.  It’s also a great addition to your trip memory book.

A B Cities:  The first player names a city.  In turn, each player names another city that starts with the same letter of the alphabet as the first city named.  For instance, if the first player says, “San Antonio,” the next player can say, “Santa Fe,” and the third, “Sacramento.”  If a player can’t name one, he is out and the last player wins and choose another city to play again.

Before you head down the road, check out our super big road trip tips article!
.
Also, the KOA Campfire Community has lots of tips and ideas on how to travel and camp with or without the kiddos. Thanks for sponsoring us, KOA!

Rebecca Darling, momma of 3 sassy Texas kiddos, writes a blog dedicated to family travel at R We There Yet Mom?. Although she swears she is not crafty, this momma never lacks in creativity and enthusiasm - her ultimate goal is making exceptional memories for her family. Follow her memory making at R We There Yet Mom?, on Facebook, Twitter, and Pinterest.